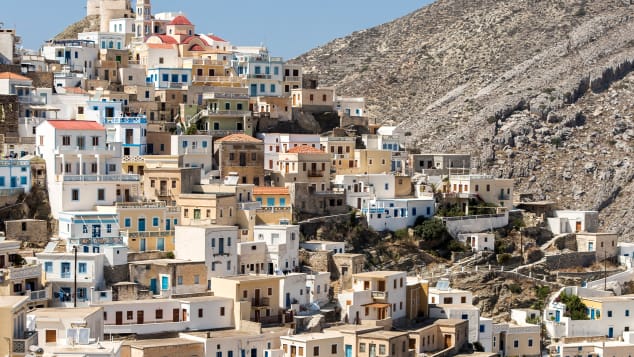 The search for a matriarchy on a remote Greek island

The search for a matriarchy on a remote Greek island

Karpathos, Greece (CNN) — White and pastel-washed buildings set atop rugged hills overlook clear, blue water. The sun sets in breathtaking fashion. The Karpathos moon is so full and bright that intrepid traveler Katie Sehl figured it for a lamp or a giant spotlight the first time she saw it. In many ways, Karpathos looks like the otherislands of Greece you’ve seen in pictures or in person, and Sehl, a freelance writer and editor based in Montreal, has just arrived on the remote island for the second time in less than two years. Although only an hour-long flight from Athens, Karpathos has an edge-of-the-world feel to it, especially in the quiet mountainous northern region of Olympos, in the off-season. Pigadia, the island’s main town, is where the action is, relatively speaking, and though it’s where Sehl is staying, it’s not where she plans to devote most of her time.

There are vestiges of a matriarchy in Olympos, a village in the northern part of the island, and it’s this unusual, unknown structure Sehl wants to understand. Olympos, while picturesque and pretty, isn’t really a tourist attraction, not yet anyway. Karpathos, though marked by beaches all around, isn’t like the other bustling Greek islands with their five-star luxury digs and fancy, white tablecloth restaurants and bars with well-known DJs spinning all night long.But then again, Sehl isn’t like most travelers. “There aren’t too many places in the world that describe themselves as a matriarchy … it seems like a rare chance to see something different from what I’m used to,” Sehl says.

From boulangerie to brick oven

One of the first stops on Sehl‘s Karpathos journey is Avlona, a small residential and farming area outside of Olympos. The drive is long and windy, treacherous in places where large rocks have fallen on the pavement.It is not for the faint of heart — or those prone to bouts of carsickness. There’s no internet in Avlona, and there’s no storefront bakery or grocery to purchase provisions. Instead, there is Anna Lentaki‘s smoldering outdoor brick oven.Modest houses overlooking lush, green farmland dot the hillside above Lentaki‘s home where sweet-smelling smoke rises. Lentaki will be supplying the majority of bread for the upcoming Greek Independence Day ceremony (also the Greek Orthodox church’s Feast of the Annunciation) on March 25, and her worn, weathered hands suggest she has been at it awhile — or, more aptly, all her life. “Who taught you?” Sehl asks Lentaki, as the two women stand astride the hot brick oven, Lentaki never losing focus of how many loaves are in the oven, when to rotate them (it’s hotter in the back of the deep cavernous space) and when to hoist finished loaves out with a giant spatula-like tool.

Lentaki‘s bread is a big deal, but so are her makarounes, and each recipe, she explains, was handed down from the women in her family. In turn, Lentaki taught her daughters and granddaughters. She’s a professional, and Sehl, a novice cook who’d be buying bread and pasta from a grocer back home, is delighted to be on this side of things. She’s helping to mark the soft dough before pushing it forcefully into its place in the oven, and later, pulling pasta dough into macaroni-like shapes in preparation for their hot salt water bath. Sehl could easily be enjoying lunch in town at one of the mom-and-pop joints along the port in Pigadia, the island’s more obvious choice for a tourist in town at this eerily quiet time of year.

But Sehl is insistent: She wants to learn and to gain a new perspective, and she knows this won’t happen dining in a local restaurant or shopping for kitschy souvenir magnets or T-shirts. The stomach-churning trek to Avlona and Olympos in the northern part of the island is a necessary part of the journey, fraught as it is. Sitting with Lentaki over a generous bowl of fresh-cooked makarounes topped simply with butter, fried onions and a smattering of cheese, Sehl hasn’t made any great strides in unveiling the matriarchy in these parts, but she has at least gotten to know Anna, the matriarch of this local family, and what drives her days in the remote land.

You might say Sehl‘s disenchantment with the patriarchy led her in earnest to Olympos. It’s a community “known for being a place where women are in charge,” Sehl says, adding: “I don’t know to what extent that is actualized nowadays.” She’s nonetheless curious to see how the roles between the men and women of this remote, sometimes punishing land, differ from the traditional patriarchal society she’s used to. Especially now when “the current cultural moment in North America and globally, is having a bit of a reckoning with some of the symptoms of maybe a patriarchal society.” A student of classical history, Sehl calls upon an essay by scholar Mary Beard titled “Women in Power,” to question the patriarchy’s very existence and further explain why she cares so much about its opposite. Is it possible the structure of a patriarchy is contrived? Over lightly sweetened black coffee as thick as mud, Sehl attempts to dig into these ideas with another local, Evangelia Agapiou. She wants to know about the matriarchal history of the place, and when Agapiou falters in her response, Sehl presses onward, asking if it is an exaggerated notion.

Sure, women helm the kitchen — not just at home but in public restaurants — they create and wear traditional garb for religious ceremonies while the men wear everyday khakis and button downs, and everyone gets by without a lot of modern-day conveniences. But in many ways, these practices seem more like remnants of another time, not an alternate society. In fact, there’s not a whole lot to outwardly suggest that Olympos has eschewed the patriarchy for a matriarchy. But Sehl seems to detect pieces of it, nonetheless: The women engage with her more than the men. They hold important roles, but more than that, their roles are valued: “In so many societies women’s power is a secret, but in Olympos the secret is out.”

Foteini Fragkou, a local woman in tourism who has taken Sehl under her wing, seems to confirm this when she tells Sehl that the women: “have some special force or power to run the house and survive in this environment.” Indeed, it’s the women who are responsible for carrying out tradition – for sharing recipes and feeding the family and now, for seeing to it that their community survives. In spite of being disappointed on some level at her findings or lack thereof, Sehl is ultimately impressed: “The women of Olympos reminded me of something even more profound: Women are powerful, no matter what system of government or society they live in.“

Edge of the world

Sehl is hardly the first traveler to desire to get off — way off — the beaten path. While savvy travelers with enough gumption can always find ways to get off the tourist trail even in the most popular destinations, it’s easier to do when the place isn’t very touristy in the first place. “There’s something a little mystifying about landing here,” Sehl says, likening it to feeling like you’re on the edge of the world.Indeed, Karpathos, so unlike Greek hot spots Mykonos and Santorini, lends itself to an alternative kind of travel. Sehl‘s aware that her presence and her very willingness to share her story via this feature jeopardizes the island’s status, but she’s also become aware of one simple fact: The island, more and more, wants to welcome tourists. Agapiou, in fact, runs a small ecotourist program in Northern Karpathos, and she describes her business efforts as getting the local community, of which she is a part of, to appreciate tourists.

“The goal,” Agapiou explains, “is not to have millions of tourists but some small groups” who’ll spend money on things like cooking classes and walking tours that benefits the locals. “The future is the system of tourists,” Agapiou says, underscoring another way the women of Olympos are in control. If they’re lucky, the tourists they draw will be like Sehl, hungry to learn and grow from their travels. People who’ll stop to smell the bread baking and stay longer to ask how it was made.