The earliest stone sculpture from Greece in the British Museum

The earliest stone sculpture from Greece in the British Museum 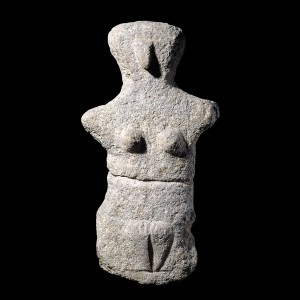 The size and style of this ungainly figure is unusual for the Neolithic period in Greece, though it does have features which link it both to smaller counterparts in clay, and to the later marble Cycladic figurines.
The arms are represented as stumps, perhaps because of limitations in the sculptor’s technique, while the legs do not appear at all. This may be explained by a connection with seated Neolithic figure types, where the legs are tucked so closely to the body that they effectively disappear, though again it might be partly explained by technical limitations.
While the stylized appearance of the face, blank apart from the rather beaky nose, is similar to Cycladic sculptures, the sexual characteristics of the figure are more noticeable on this figure. This used to be interpreted as evidence of the early worship of a ‘Great Mother’ goddess; though now it is clear that this is a simplistic explanation for many different phenomena. However, it is possible that the significance of the figure may have been connected with female fertility.

Rhyton in the shape of a bull’s head 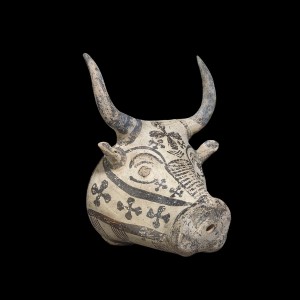 This clay vessel would have been used for the sprinkling or pouring of liquids as part of a religious ritual. It is hollow, with an opening at the back and a hole in the muzzle.
Ritual sprinklers or libation (liquid offering) vessels were frequently made in the shape of animals heads with small holes in the mouth to allow the liquid to escape. The bull’s head is the most popular form. Bull-head rhyta are also known in other materials, most famously the one carved from serpentine from the Little Palace at Knossos and the example in silver from Shaft Grave IV at Mycenae, both of which had gilded horns.