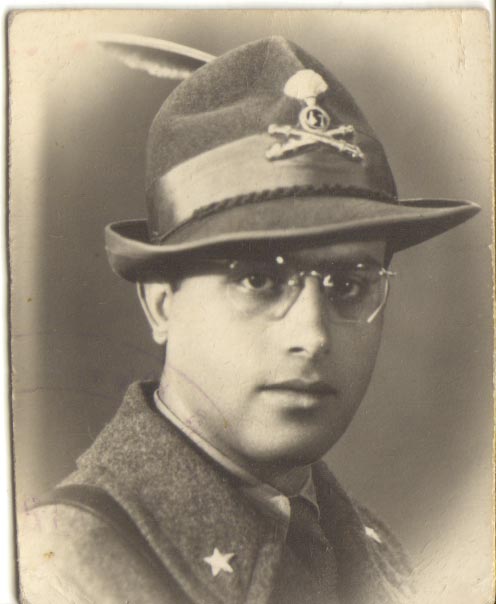 On September 6th 1943, two days before the Italian truce with the Allies was announced, a German battalion landed in Karpathos and on September 13th 1943, following an order by Admiral Inigo Campioni, the Italian Contingent of “REGINA” Brigade in Karpathos was handed over to the Germans. Most Italians welcomed Campioni’s relief, believing that the war had ended for them and soon would return to their homes after years of serving on dangerous war fronts. But many had second thoughts: the surrender of the Italians forces to the Germans did not guarantee good cooperation between them and existed many obstacles until they returned to their homeland.

Lieutenant Michele Memola in 1943 when he served in Karpathos.

Left their last breath in Karpathos

The Germans gathered the Italians at Pigadia to send them to Crete with final destination northern Italy, where Mussolini ruled with the support of the Germans. On September 18th 1943, a cargo ship came and took few hundred Italians to Crete and after two days it returned to pick up others, who did not have the same fortune: At the time the Italians boarded and the ship was preparing to sail, 3 – 4 English airplanes began bombarding the ship and the prisoners. The result was that 12 Italian soldiers lost their life and 72 others were injured. That same evening the ship for Crete, with those who survived, but did not come back. 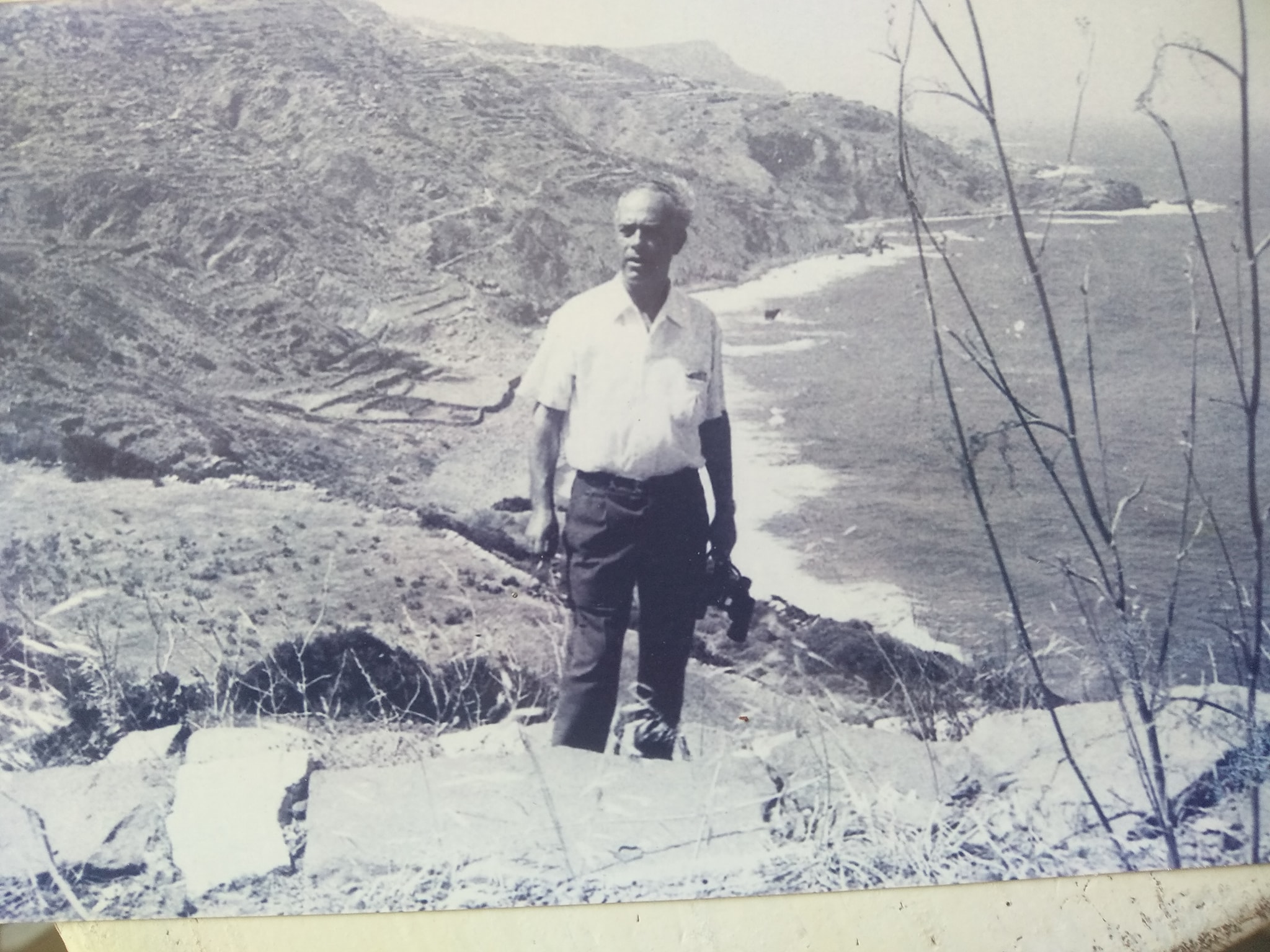 A few days later, the Germans gathered the rest of the Italians prisoners in concentration camps in Telegraph, Damatria and Kyra Panagia to send them to Crete when suitable transportation could be available. Several of them tried to hide in the nearest villages and remote stables with the help of the local inhabitants of the island. Some, for more safety, went to Mesohori and some of them tried to escape with a boat, but they could not make it, because of bad weather. After a few days most of the runaways began to surrender before the German deadline passed because of lack of food and the fear of the Germans sending patrols to the villages. 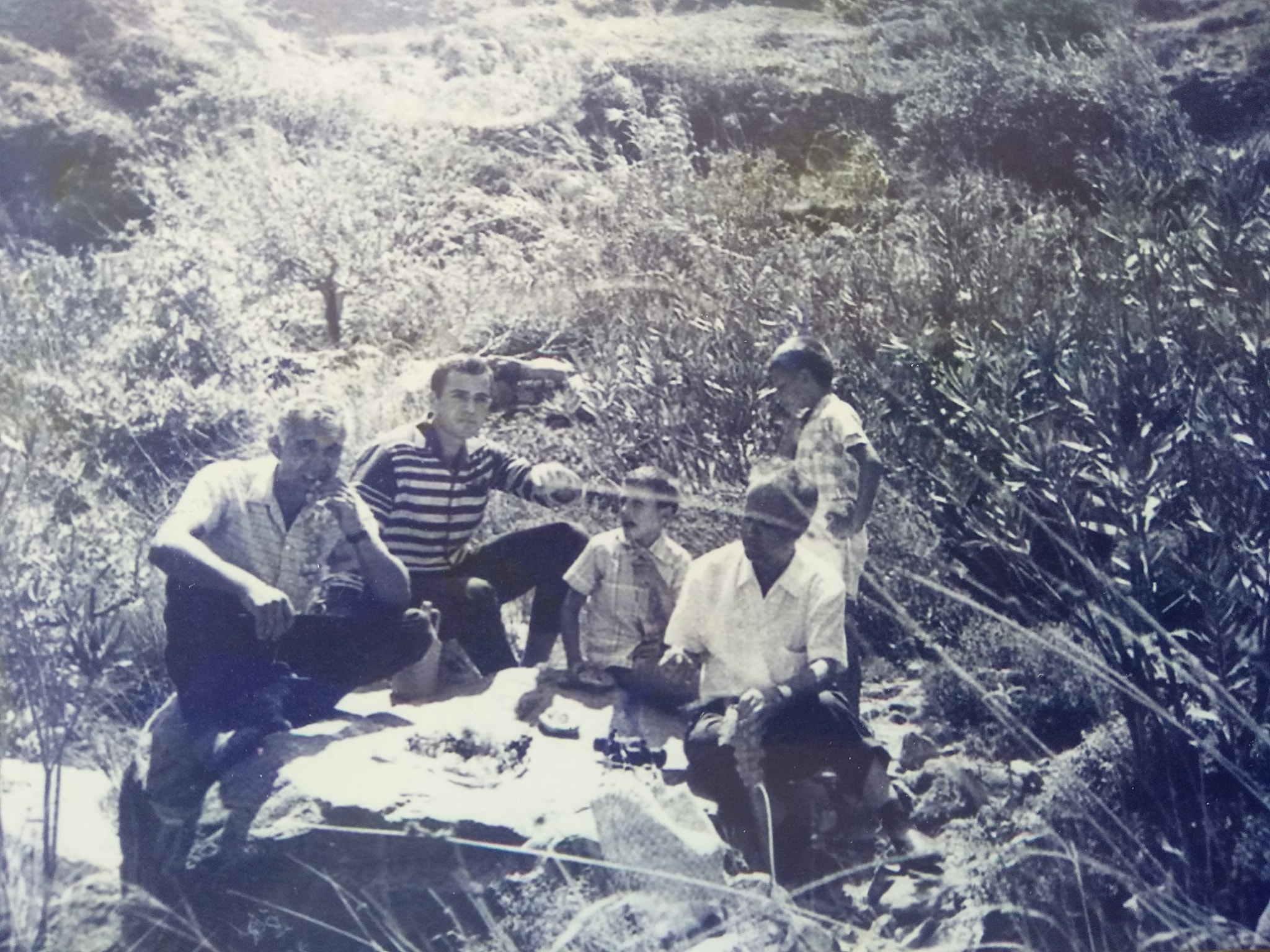 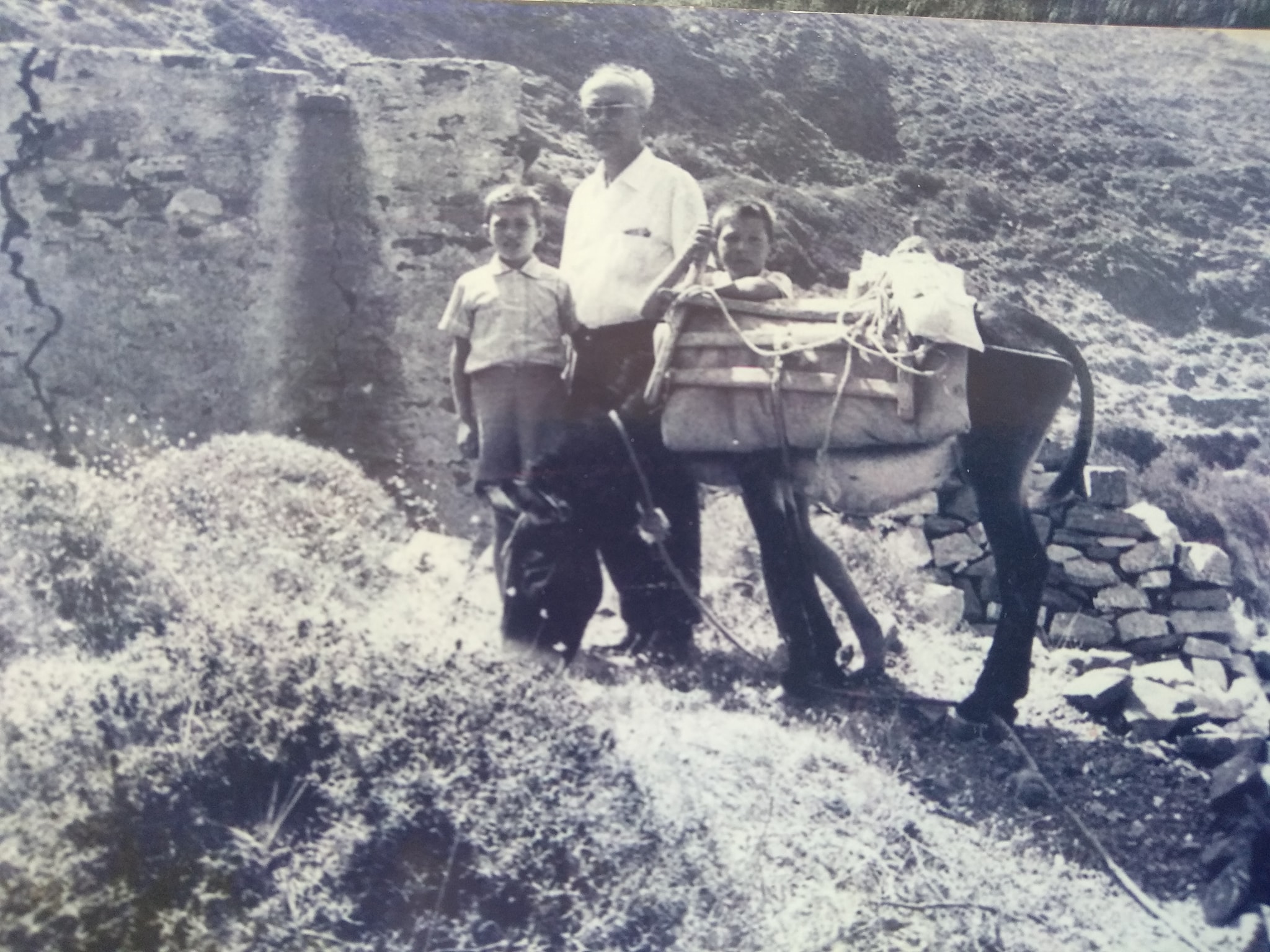 Michele Memola, guided by the young man and the donkey who took him to Alonaki.

An Italian soldier, Alessandro Orofino, was hiding in Aperi. The time passed by the Germans deadline, without surrendering. On October 23rd 1943, after treason, the Germans arrested him and executed him without any formal procedure. 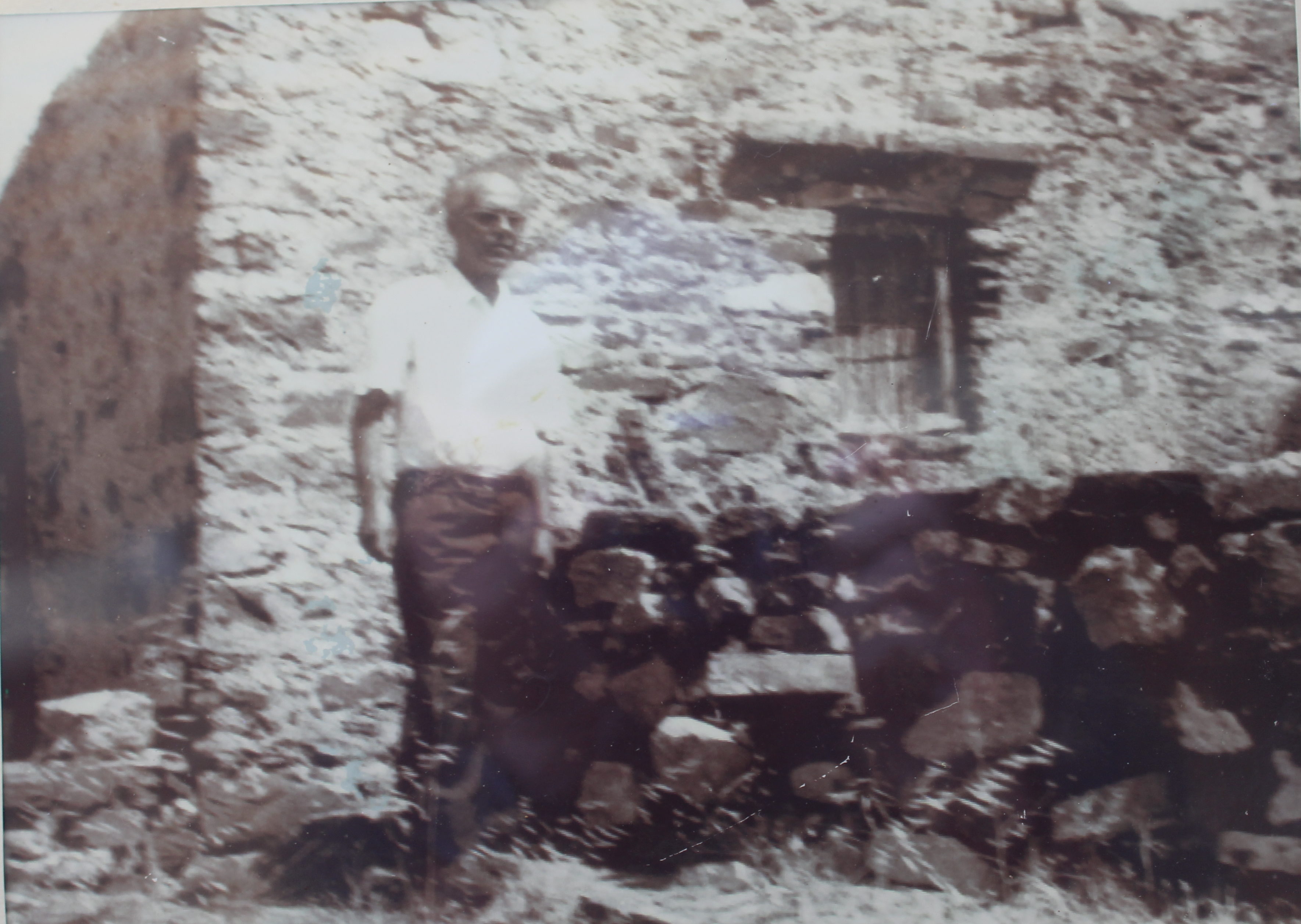 Michele Memola in front of the stable that protected him from the Germans.

Michele Memola, an anti-aircraft 2nd Lieutenant, was one of the few Italians who decided not to surrender and hid in Mesohori. At first, several Messochoritians, such as Manolis Moschonas, Giorgos Politis, Paschos Stamatiadis and Manolis Harokopos, hosted and housed him in their homes. Manolis Moschonas, in order for the Germans not to recognize him, gave him the suit of Yannis N. Moschonas, who had immigrated to America, and fitted him right. Because of his army rank and because he was a small man, they called him “Tenenteaki”.

When the Germans were secured in Karpathos, the position of the Italians worsened. The Mesochorites who protected Memola understood that he could not stay any more in the village, the Germans will find him and he would have the fate of Alessandro. The only solution was his relocation to Alonaki, where George Politis had a stable. It was in a ravine two kilometers from Mesochori, and a good distance from the path that led from Messohori to Spoa.

The stable became the permanent residence of Memola, where the Messohoriites visited him to keep him company and to bring him food from the little they had for themselves. His food was supplemented with wild vegetables he collected from the surrounding area and with fish that caught and other seafood he found on the beach of Makris Gialos.

Day by day the situation worsened, the Germans increased their patrols in the Mesohori area. They were taking local Karpathians for hostages, to force them to report where the Italians fugitives were hiding. Among the fugitives was 1st Lieutenant Aldo Patruno, whose body, after a few days, on november 5th 1943 he was found in a ravine. After two months of agony, Memola could not find any other solution and decided to commit suicide to end his drama. He took his service revolver, supported it on his temple. But at the last moment changed his mind. The bullet pinned to the stables’ ceiling. He had decided to surrender.

Memola did not trust the Germans, feared he would have Alessandro’s fate, he surrendered to the Italian military Police (Carabinieri). They took him to the Menetes and handed him over to the German Lieutenant Stoltsman, responsible for the Italian fugitives. In Menetes, Stoltsman put him in the upper floor of Nicolas Diaconis home who lived in America. Diaconis’ wife Hatzirigopula-Fotini, along with their son Costis, stayed in the first floor and often gave him the little food they had for themselves.

After a few months Stoltsman sent Memola to Rhodos on May 17th 1944 where he met one of his friends the teacher Harokopos. From there, the Germans sent him by boat to Dulag in Athens on may 31st 1944 and then by rail to a prison camp in Germany on August 8th 1944. He stayed there until 1945, when he was freed by the Allies and returned to his home in Italy. 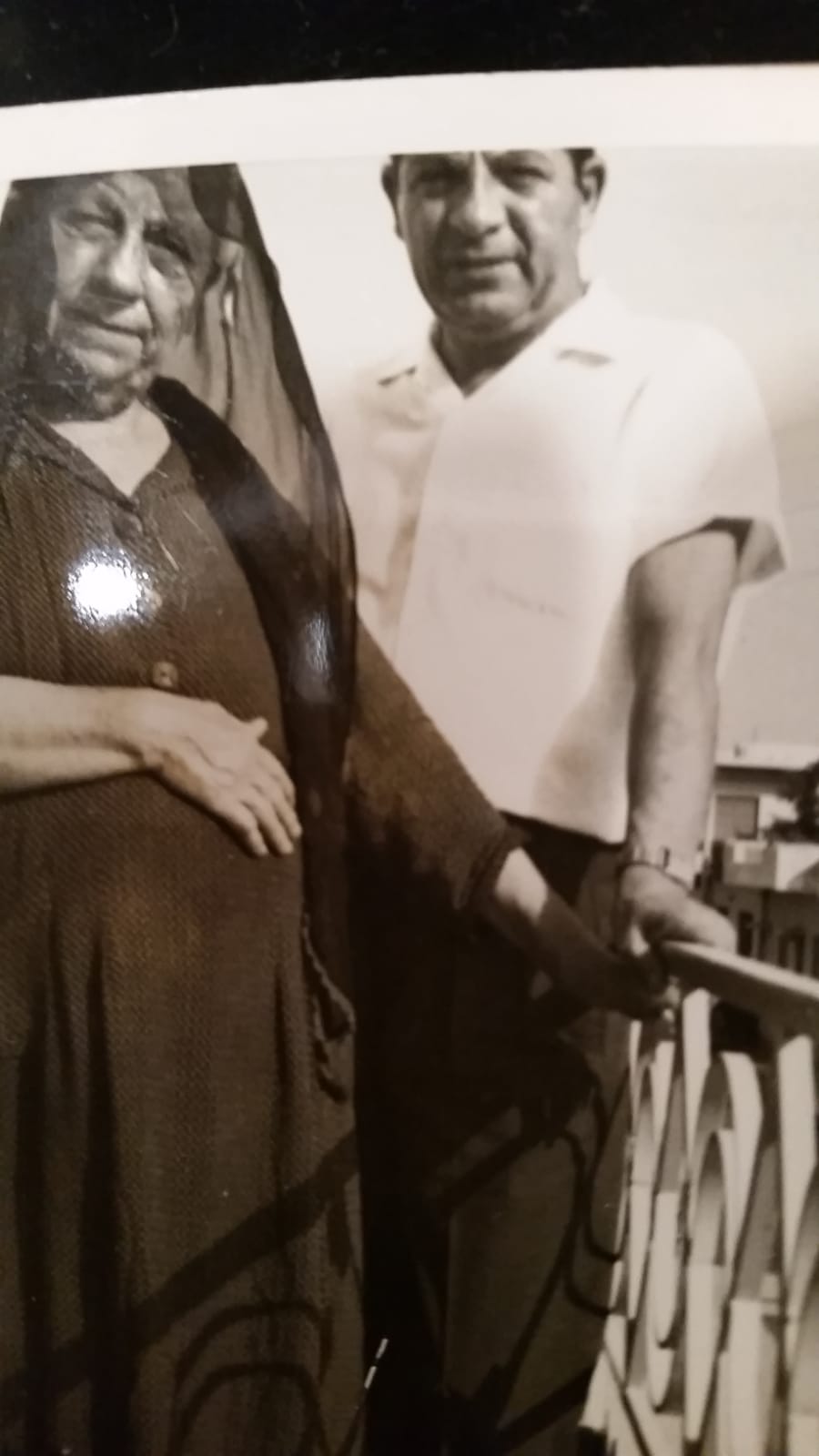 Kostis Diakonis with his mother. In the second floor of their home, the Germans put Michele Memola under restriction.

The years were passing, but Memola did not forget Mesochorites who, in the difficult years of the war, protected him and helped him to survive risking their lives. Two times, in 1968 and 1971, he visited Karpathos. His saviors were alive and went to thank them. They housed him in the same houses they hidden him. He went to Alonaki and as soon as he entered the stable, he stared at the ceiling. On top of a beam, the bullet that he intended for himself was wedged.

The years passed, and when he was alone, his thoughts ran to the past, and in his mind he re-experienced the dramatic events that he lived  in the Second World War. He recorded them for the purpose to publish them in a book. But he left for the eternal journey before he was able to fulfill his last wish.

The sons of Michele Memola and Manolis Harokopos, Massimo and Theoharis meet 75 years after the dramatic events that their parents lived.

The years pass, the memories remain

A month before I left for my summer vacation to Karpathos, I got a message from Italy. It was from Massimo Marino Memola, son of Michele Memola: On July 24th he would come to Karpathos for a week, he wanted to meet and thank the descendants of the people who helped his father. He also wanted to cross and complete the information his father recorded before publishing the book. He was accompanied by his father nephew Gioacchino Memola, senior officer of the Italian Army. He asked for my help.

As soon as I arrived in Karpathos, I contacted professor Theoharis Harokopos, the son of Manolis Harokopos and a friend of mine from high school. He is one of the few, who as a child lived through the events, and thanks to the participation of his father he has first hand information. Theoharis knew the grandchildren of the people who helped Memola. He contacted them and we worked out our plan. 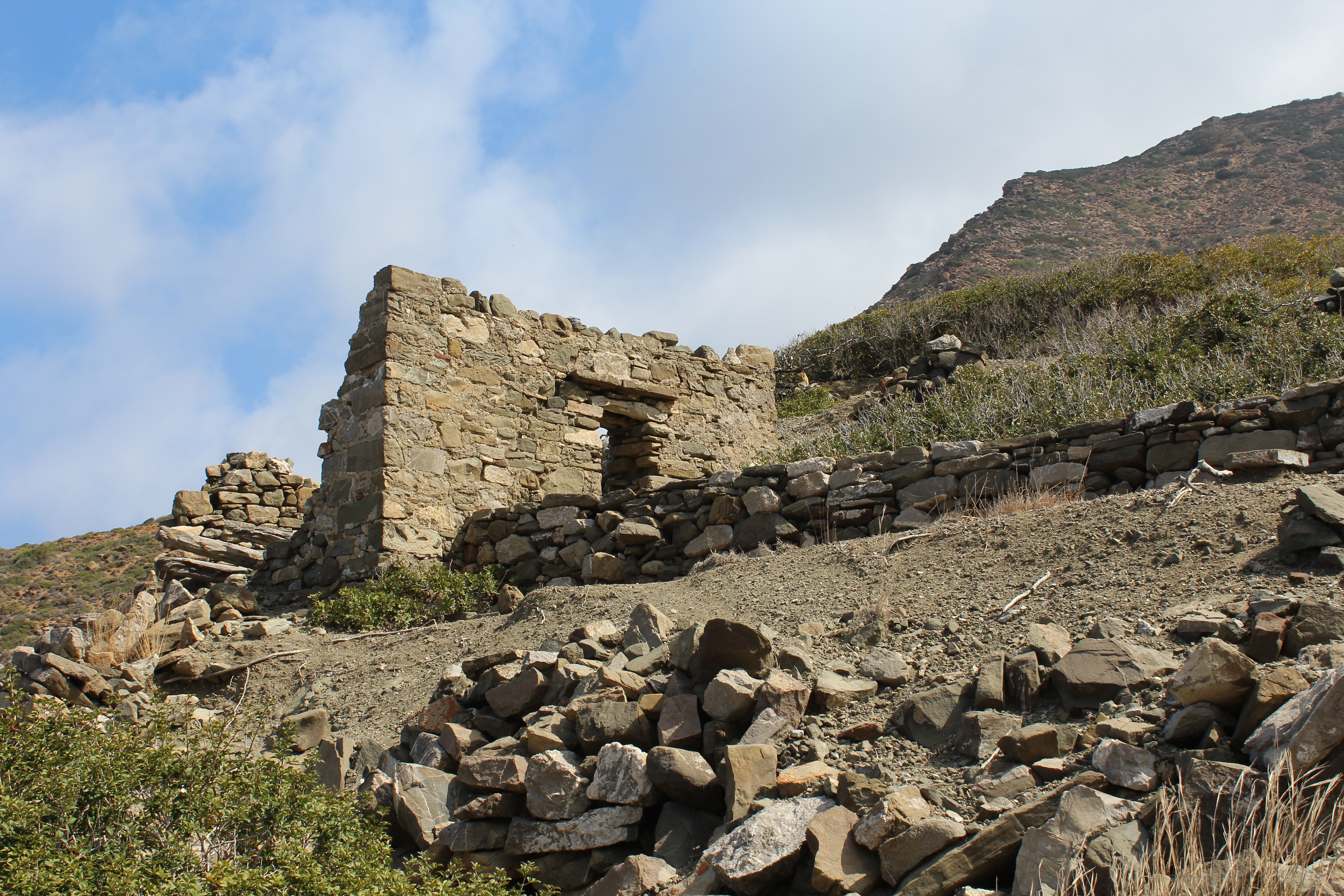 As stands today, half-ruined, the stable that hosted Michele Memola 75 years ago.

On July 25, with Theocharis and the newly arrived Massimo and Gioacchino, we went to Mesochori. In his café, near the church of Vrysiani, we found were Yannis Moschonas waiting for us, and as soon as he saw him, Massimo fell into his arms and tears began to roll out of their eyes. From their thoughts were passing scenes and events from the war years. They did not lived the events, but they heard them many times from their parents, grandparents and other relatives and were impressed in their memory. Seventy-five years had passed since humanism proved to be stronger than the cruelty of the war. The story of “Tenenteaki” stays alive in the memory of Messochorites and became part of the folk tradition of the village.

We walked through the village’s stone-paved alleys, from the same as in the years of the war, his father walked only at night and with great precaution. We stopped in the homes, where the Mesohorites hid him risking their lives, protecting him from the Germans. We found closed houses, their owners were gone for the eternal journey. But, we had the feeling that they opened their doors to welcome “Tenenteaki’s” son and tell him their story.

The next time we went to Mesochori, our destination was Alonaki guided by Yannis Sarris. Massimo wanted to see Politi’s stable, which for two months had become his father’s hiding place. He was stable was partially destroyed, but we felt the warmth and security he once offered to “Tenenteaki”. Returning to Mesochori, we stopped at Stephana, where Foula Reisis-Halkias treaded us. From there, we went to Lefkos, where Yannis Moschonas was waiting for us, where he offered us a rich meal at his “Dramountana” restaurant. In Mesochori, along with the emotion we felt, we also tasted the traditional Mesohoritan hospitality.

On the return we stopped at Menetes, Massimo wanted to see Diaconi’s house where, in January 1944, Stoltsmann restricted his father. With the help of the deputy of Menetes community George Spanos and Yannis Othitis, we identified it. The two-storey house, is one of the most traditional houses of Menetes, and is in good condition. The next day, Massimo went back to Menetes, with the current owner Michael Franco, wanting to see the interior of the house, which the Germans had confined his father for months.

At the Italian cemetery

Returning to Pigadia, we stopped at Platyolo at the former Italian military cemetery. Massimo wanted to fulfil the request of his compatriots whose parents and grandparents had buried in the cemetery: They wanted to bring them some soil from the cemetery. We found it in a deplorable state. The cross and other decorative items were destroyed and disappeared, and the whole cemetery area had been absorbed in the “tiles” of a building that had been renovated. The pain was painted on their and the shame in mine. I cannot describe how I felt. 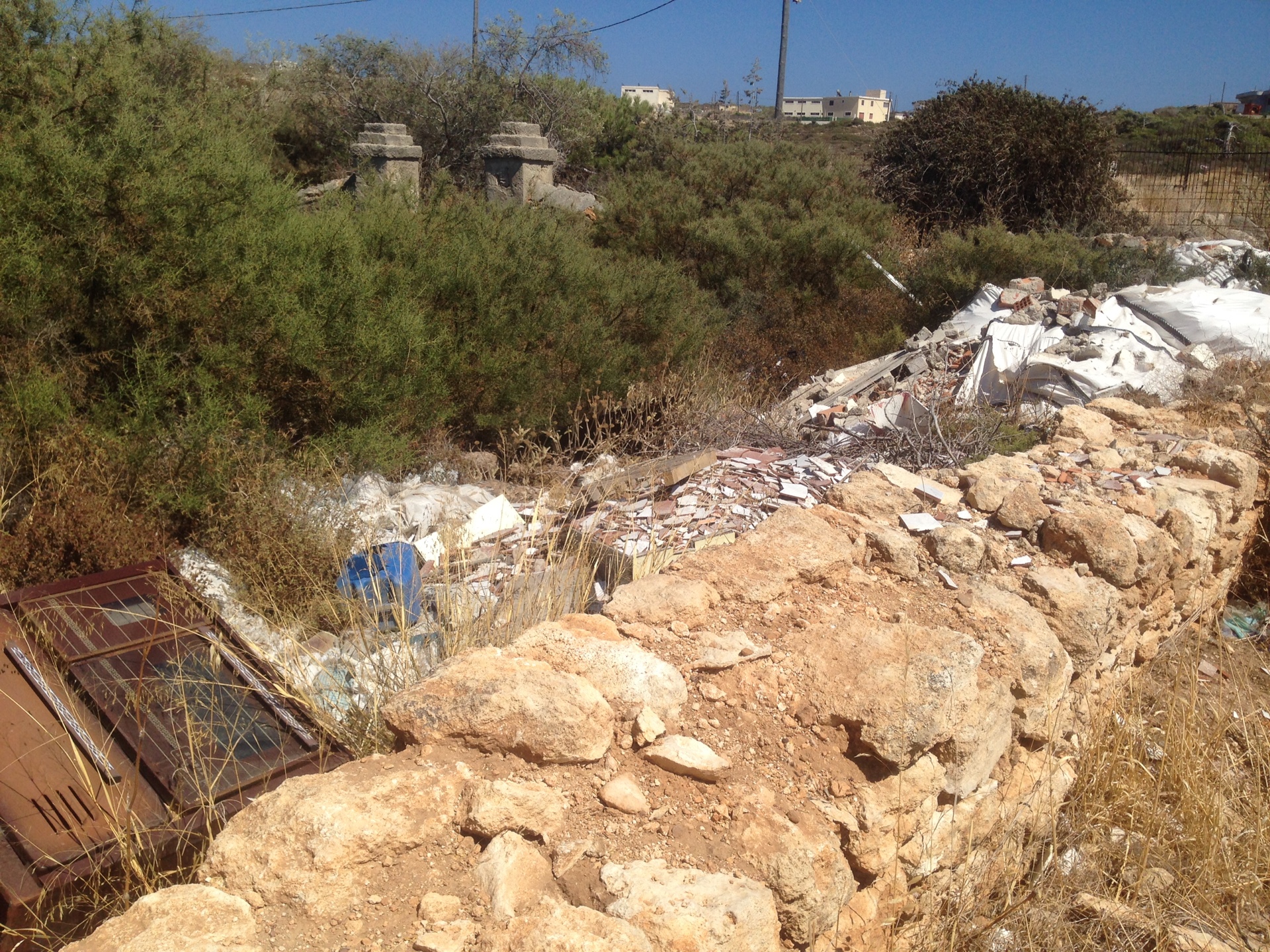 The pain was painted on the faces of Massimo and Gioacchino and the shame on mine when we saw the situation of the former Italian cemetery.

Waiting for the book to be published

After a few days, Massimo and Gioacchino left for Italy with the information we gave them about “Tenenteaki”. We are happy too. Massimo Memola’s book, will be released this year, saving part of the recent history of Karpathos and make known that humanity prevailed during the difficult years of the war. 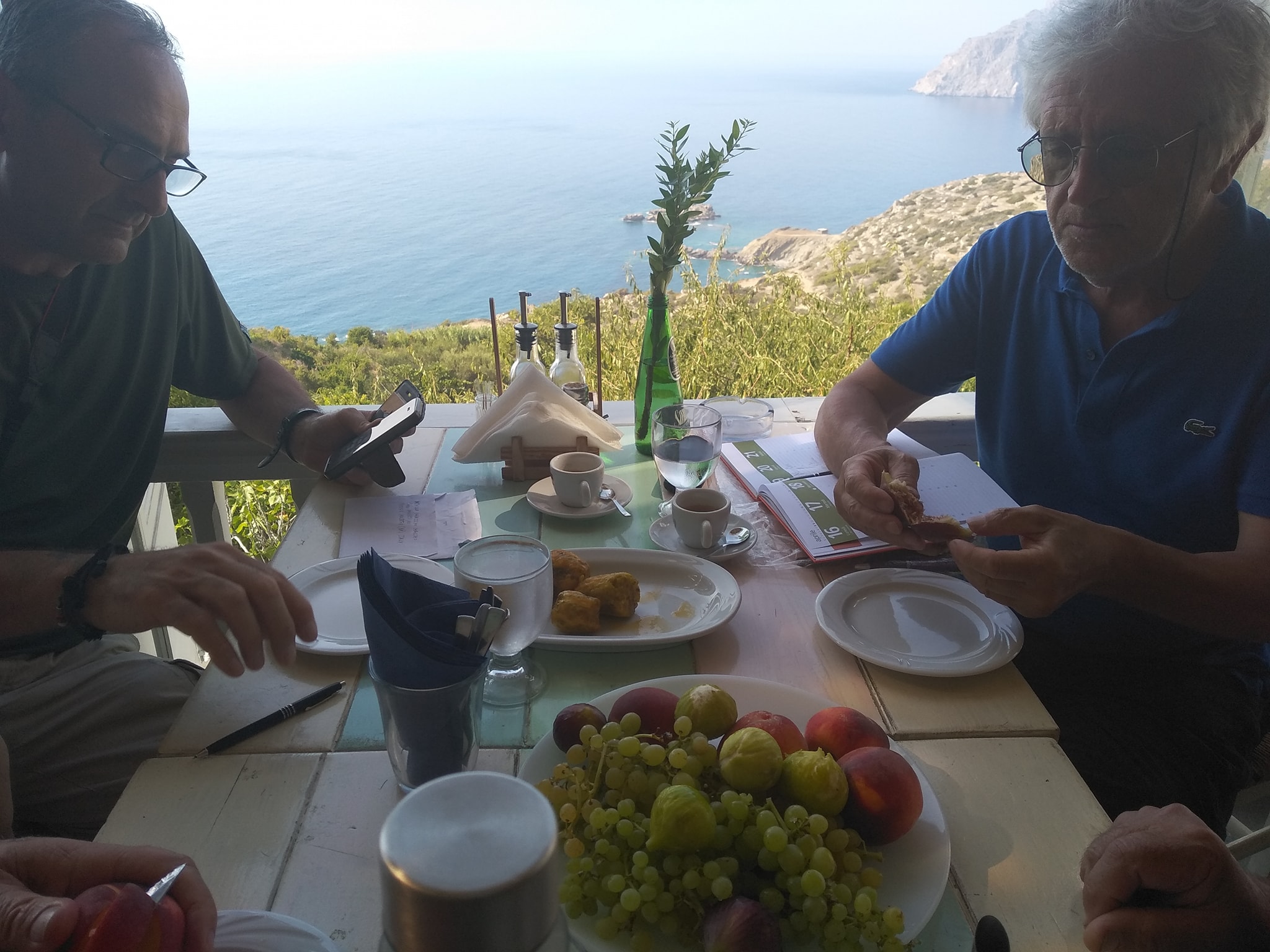 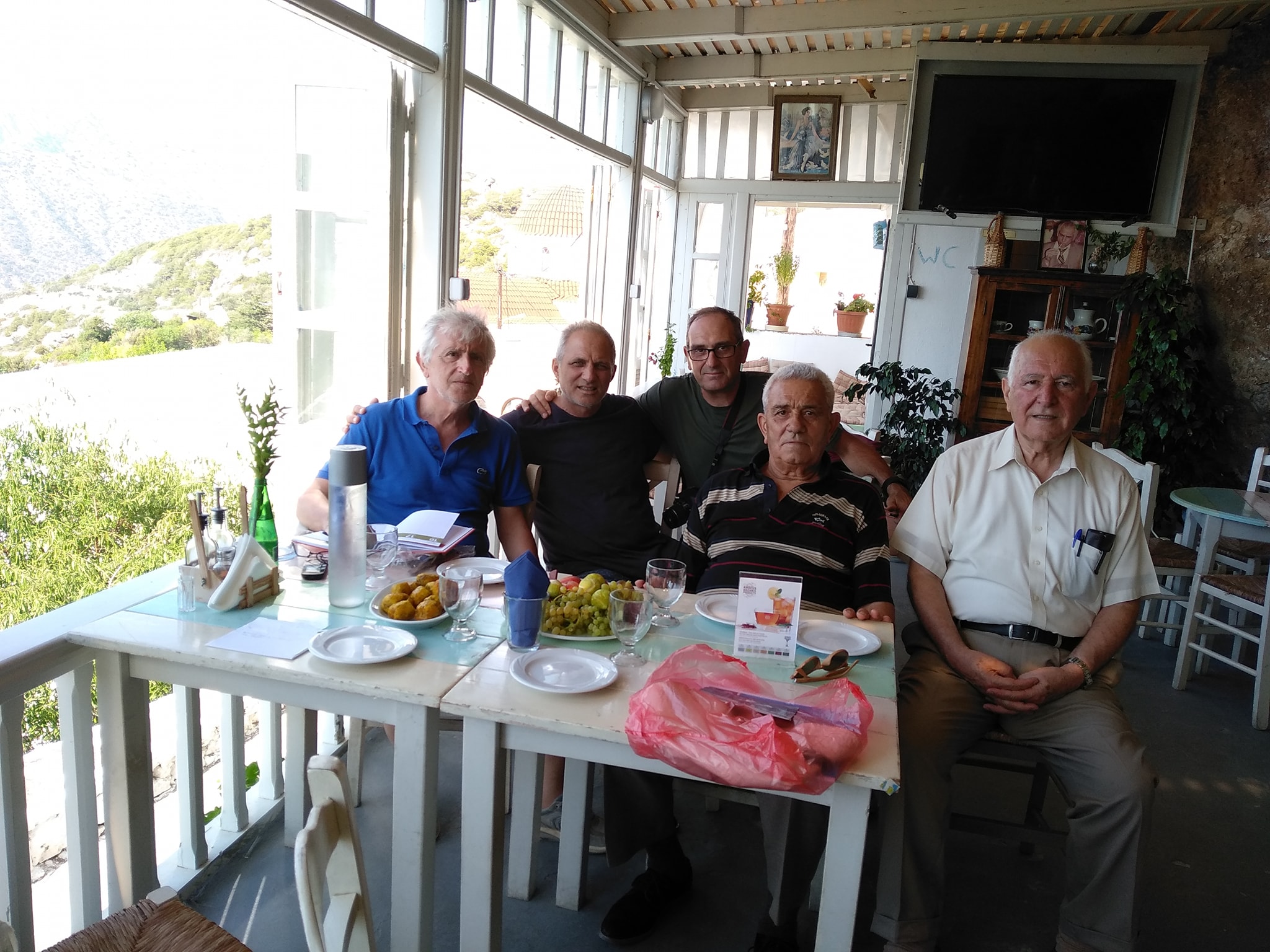