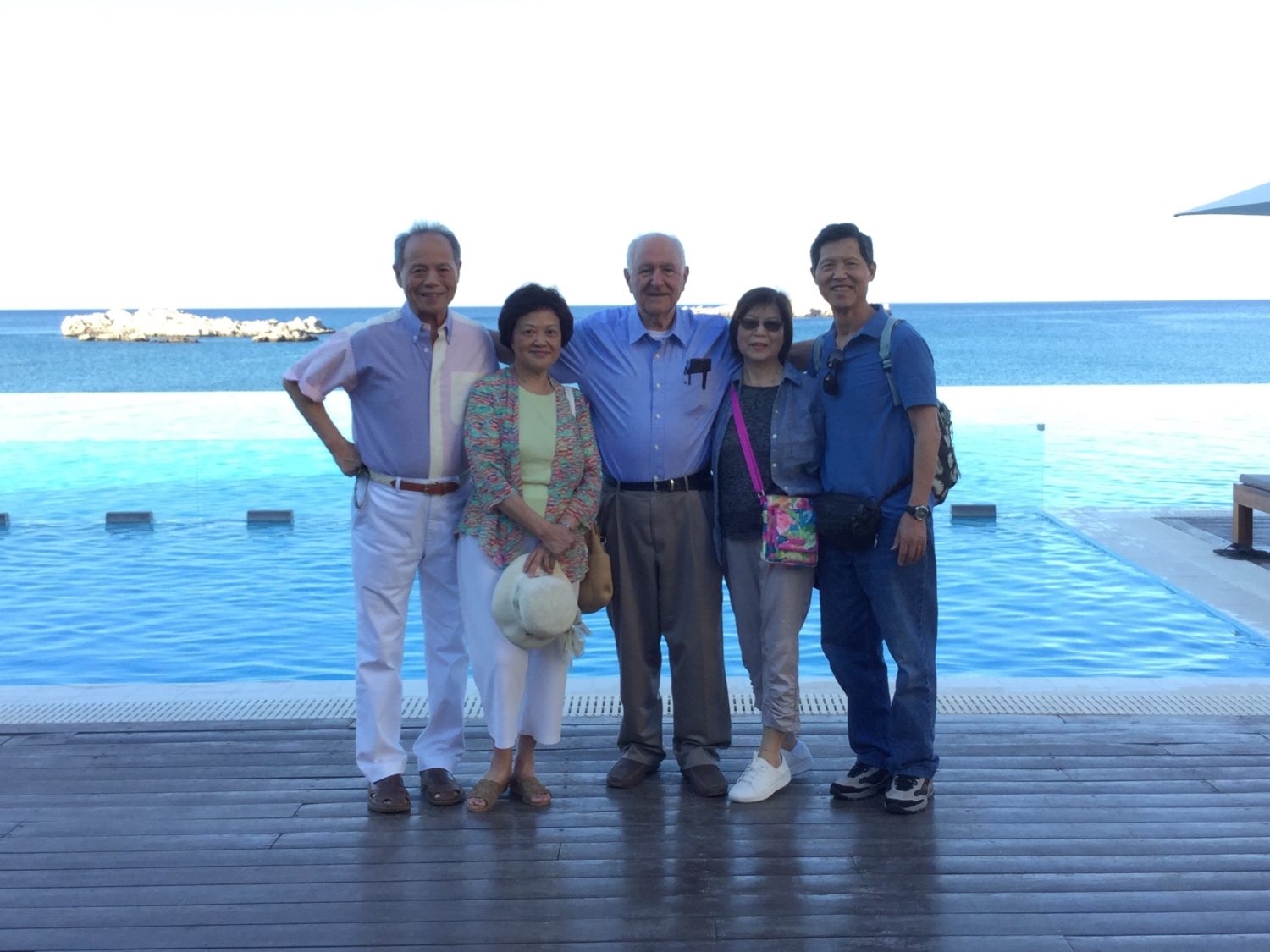 Manny with Allen, Joelle, Tina and Frank (from left), in the background the sea with Afoti islet.
English

In America, particularly in the New York Metropolitan Area, several races, cultures and religions coexist, and more than 100 languages and dialects are spoken. In our work and transactions, in social and cultural events, we come in contact with a cultural mosaic that gives us the opportunity to meet people with different cultures and ethical values, with several similarities and variations from ours, thus creating mutual appreciation and friendships. 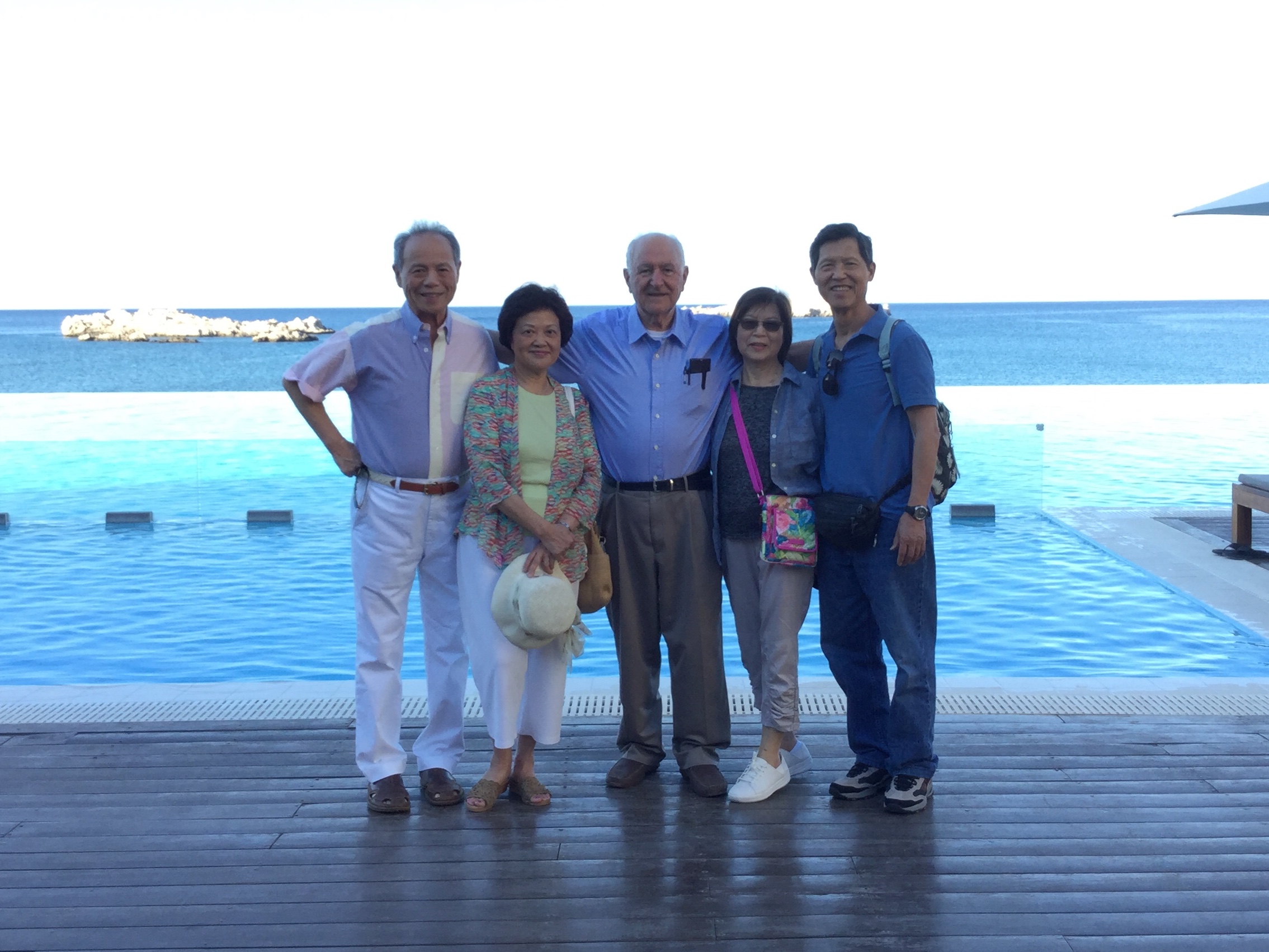 Manny with Allen, Joelle, Tina and Frank (from left), in the background the sea with Afoti islet.

Chinese visit to Karpathos
In this environment, I met Allen Chiu, a Chinese-born American, who in our discussions, besides Greek and Chinese philosophy, morals, customs and values, talked about the peculiarities and beauties of our place of origin and our summer vacations. Allen, inspired by my words, decided that he and his wife Joelle would visit Karpathos and find out. At the same time, he convinced his son Conrad, with his wife Blessing and their daughters (Jocelyn, Alexandra, Stephanie) and another couple, Frank and Tina Perng, to follow them. Thus, on 30 June, a group of nine Chinese arrived in Karpathos and stayed  at the Alimunta hotel. 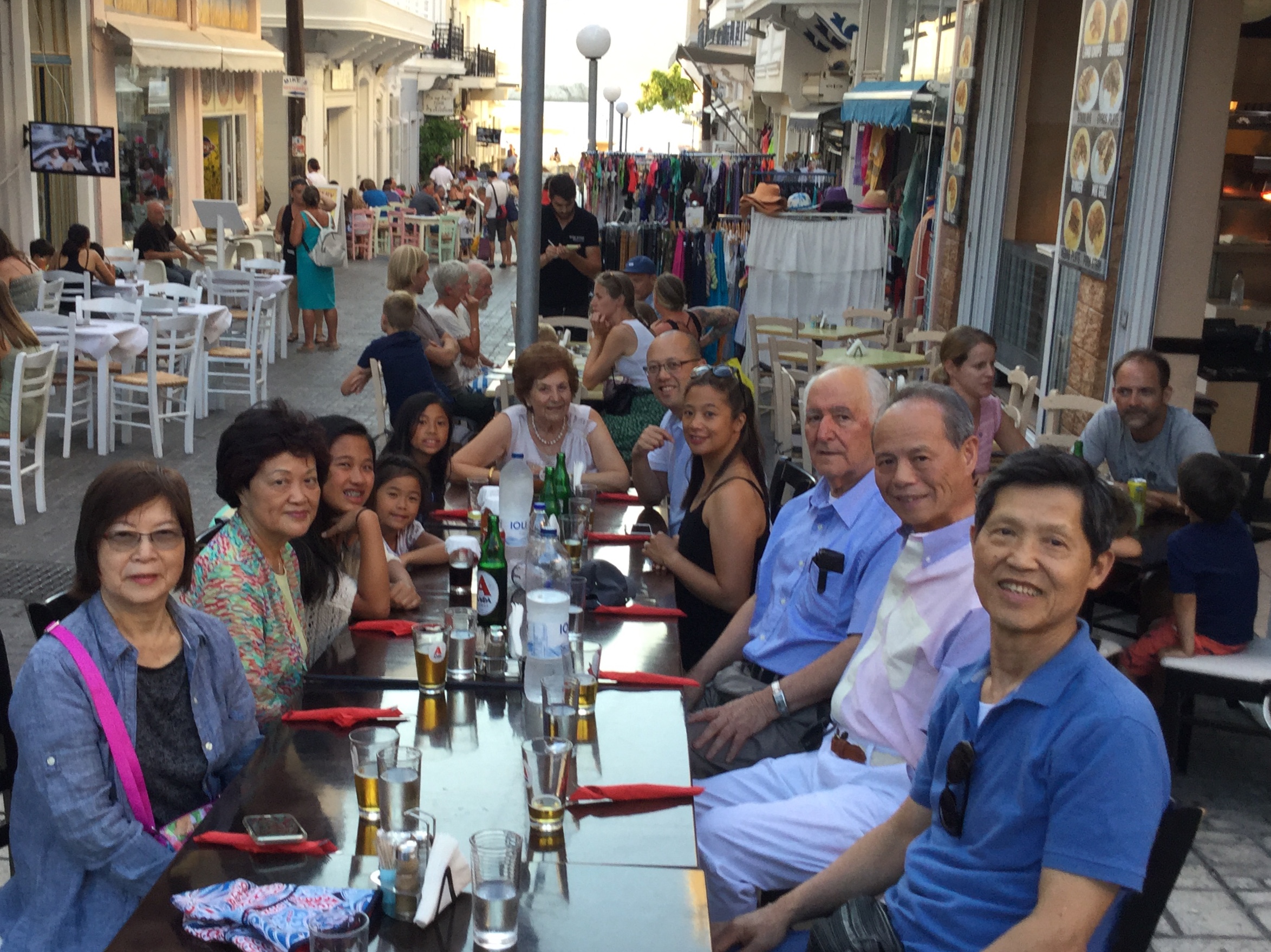 Frank και Tina, the harbor and Karpathos Acropolis in the background.

Allen and Joelle, the harbor and Karpathos Acropolis in the background.

Karpathian-Chinese meeting
That same evening, Karpathian family ties were blended with Chinese. In the courtyard of Peter and Angie Felix house, they met a family gathering of more than a dozen people, who came to meet and welcome them to their island. Once they got together and met each other, Peter junior and Nick Felix came playing lyre and pipe and singing:

One thousand times welcome to our beautiful island,
we wish you to come back, it is our desire.

Allen’s granddaughter, Jocelyn, who is taking violin lessons in America, showed particular interest in the lyre and began to experiment.

Frank and Tina, among trees and flowers in the garden.

Flowering meeting
In addition to the family love and warmth they felt, they were attracted by the blooming trees and plants planted in the yard and garden. It is also common for the Chinese in America, living on the outskirts of big cities. Particularly they liked the grape vine loaded with hanging grapes. Getting inside the house, they took notice of a room that depicted the interior of the “old Karpathian house”, with “sopha”, “panosouphi”, trunks, benches, shelves with dishes, canvases with photographs of their ancestors, old embroidery with wise sayings and the storage room.

As Dawn wakes up
Their daily schedule began as Dawn “awakened” and the sun was coming out, drawing golden rivers into the sea, making the clouds on the top of the mountains look like pink veils. Then, a swim in the blue sea and walk on the sandy beach. Later a walk to the harbor, from the seafront promenade to the cafes and restaurants and return from the pedestrian street with the tourist shops. 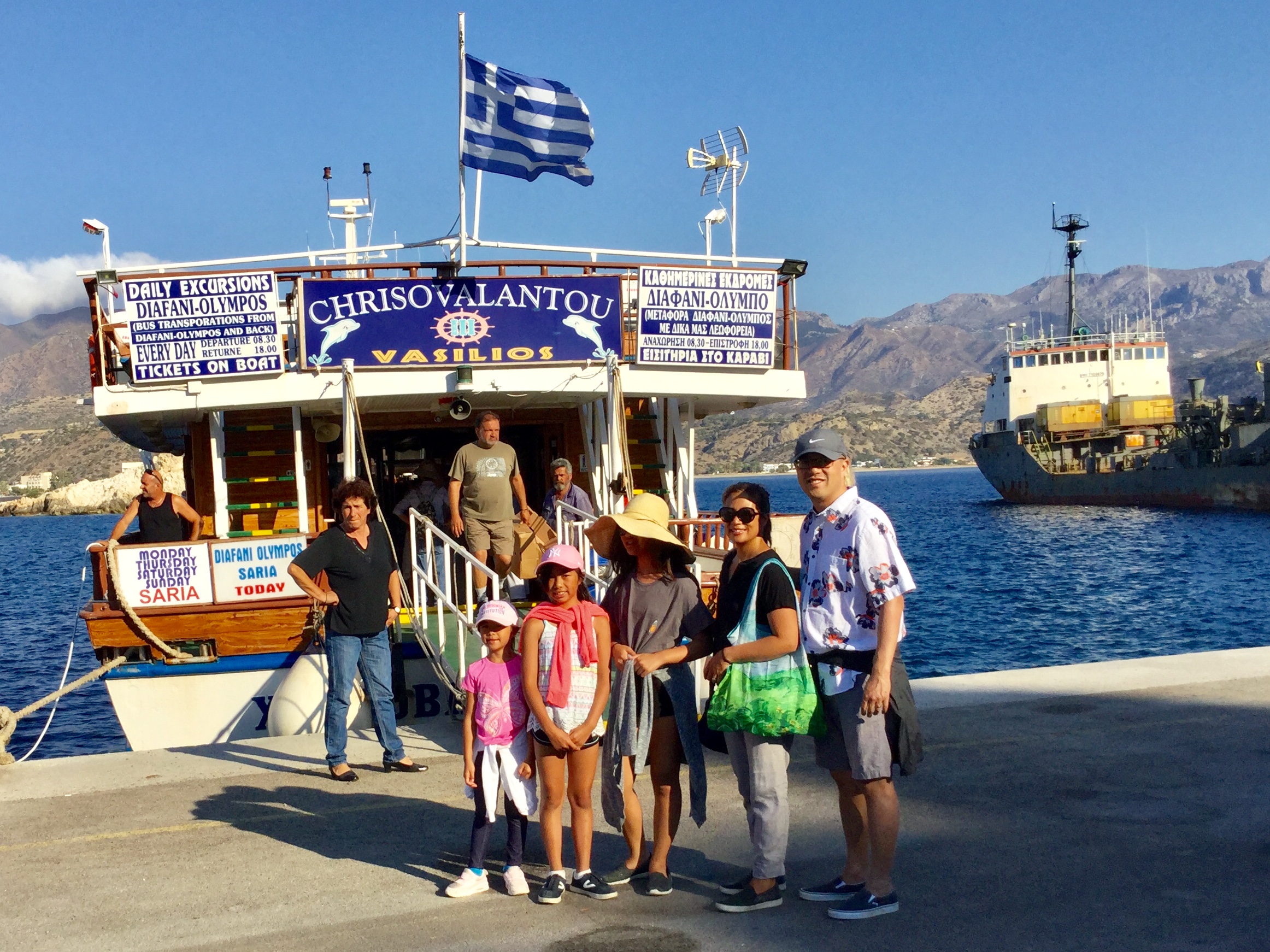 Conrad and his family preparing to board “Chrysovalantou”. 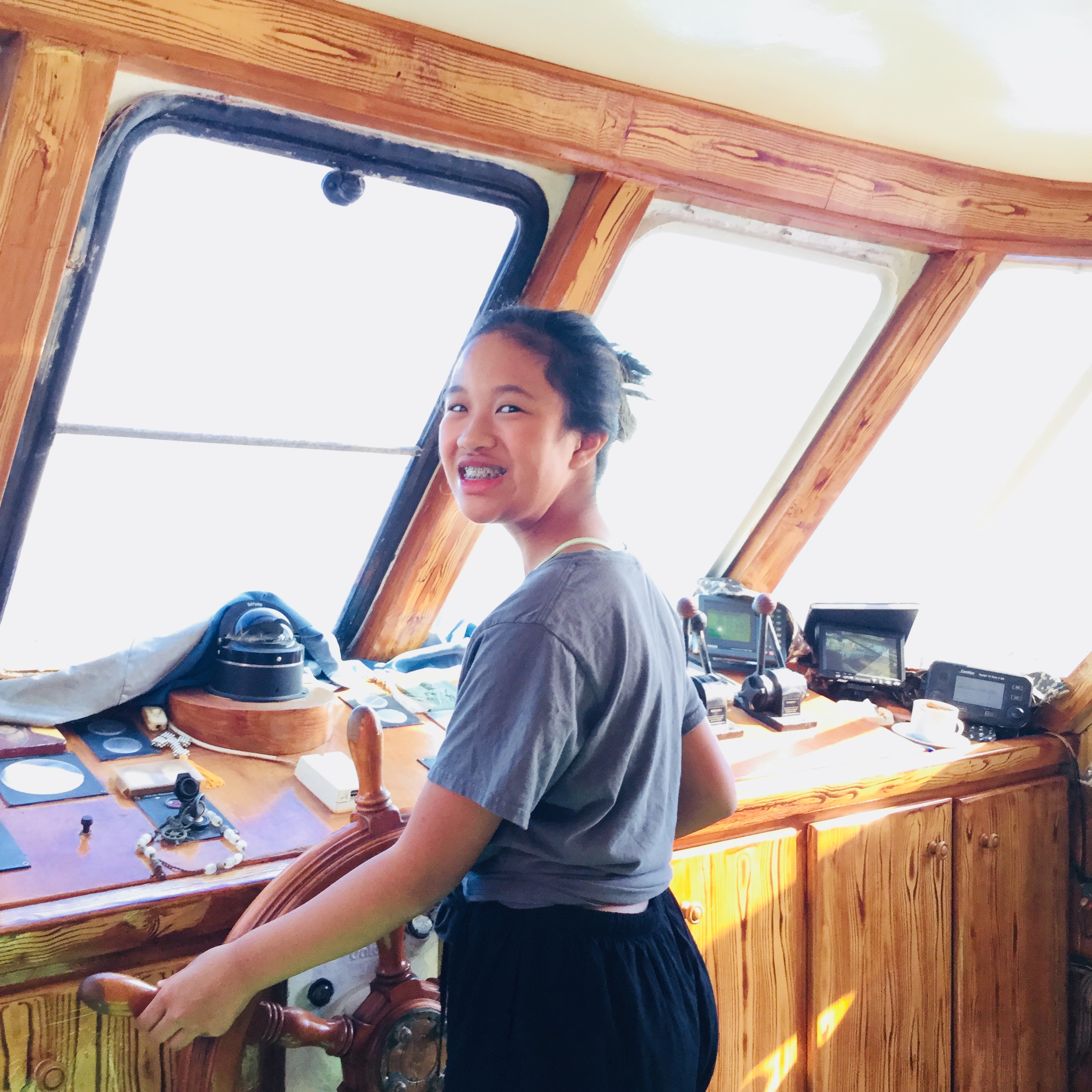 With confidence, Jocelyn took over the ship’s command and the fortunes of two hundred souls.

The little captains
In the morning of the next day they boarded “Chrysovalantou” to Diafani. The ship passed Vronti and continued from cape to cape, leaving behind the beaches of Achata, Katodio, Kyra Panagia, Apella and Saint Nicholas and continued, passing from Agnontia, Saint Minas and other pristine beaches until it reached Diafani. The captain left the grandchildren to enter the ship’s cabin and felt as if they were taking over the ship’s command. The mountains as they descend abruptly to the sea, seemed that they reached the heavens. 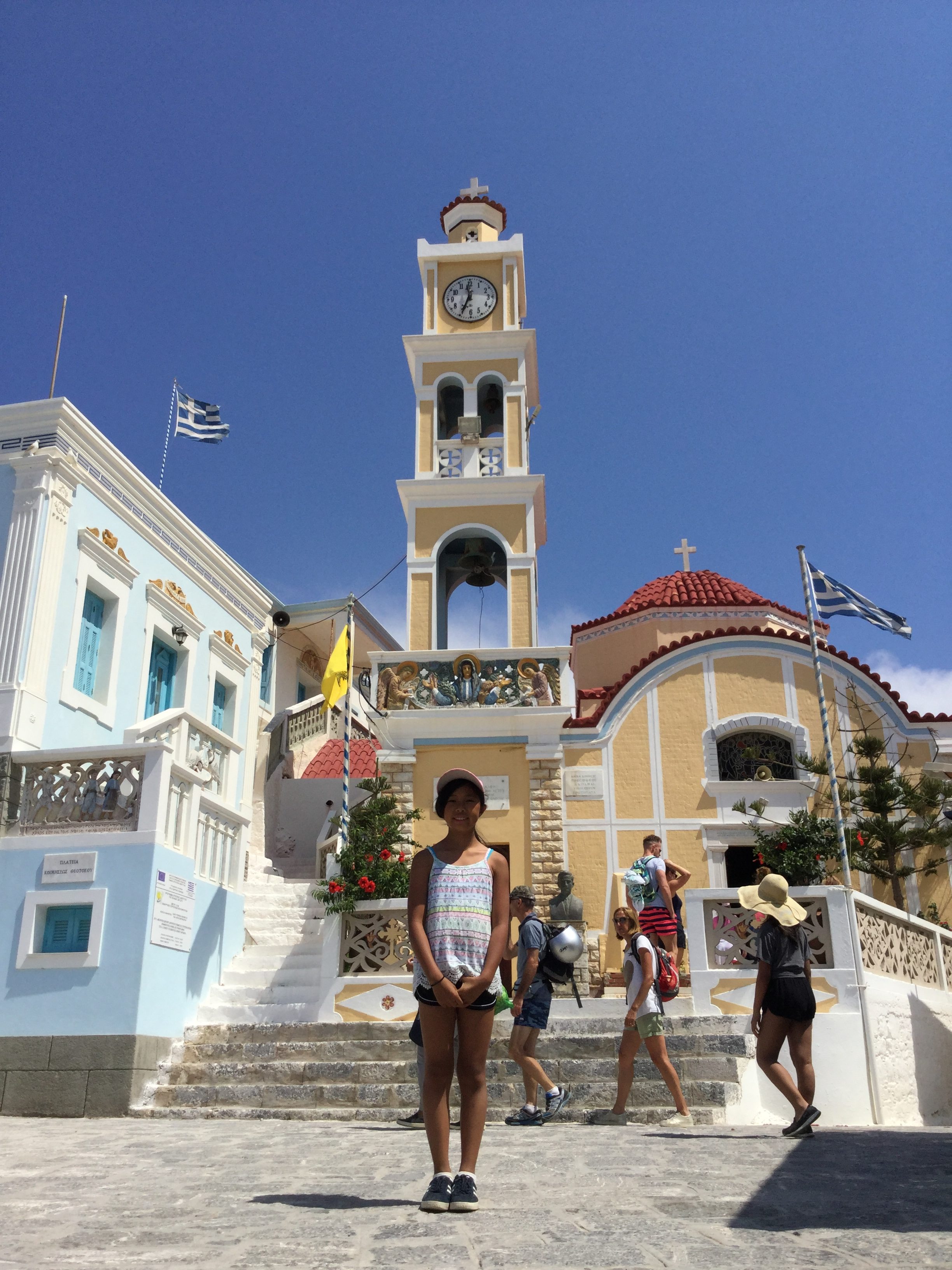 Alexandra at “Platy”, in front of Our Lady church.

Perched on the slope
The bus that took them from Diaphani, seemed like a snake passing through narrow ravines and slowly climbing up. Suddenly Olympos appeared on the slope of a steep mountain, as if to hide from the eyes of pirates. When the bus reached the entrance to the village, they followed the stone-built path leading to “Platy”, the village’s center, where the church of the Holy Mother is located. Entering the church, they received awe and felt that they are in a sanctuary and place of prayer. They admire the gold-plated iconostasis and lighted a candle on the Holy Mother’s icon. As mother, she listens to the prayers of all the people.

At the “Mill”, they tasted traditional Olympian, “prepared for gods”, food.

From another era
In the backbone of an immense flap saw around 60 windmills, gazing at the western Karpathian Sea and telling them the story of another era. When the Olympians, in order to survive, did not leave an inch of land uncultivated to produce a little wheat and barley. One of the mills has been transformed into a restaurant, where they tasted traditional Karpathian dishes cooked on grills and baked in stone-built ovens fired with wood.

Manny with Frank, Tina, Joelle and Allen (from left), in the background Aperi and beyond Pigadia.

To be protect from pirates
In the afternoon of the following day, they visited the central villages Aperi, Volos, Othos, Pyles, which, like Olympos, were built in the interior of the island to be protected from the pirates. From Pyles descended to Sikellaos, on the west coast of the island and following the west coastal road, arrived at Mesochori with a stop at Lefkos beach.

When the sun began to set
On their return they stopped at Sikellaos in a seaside restaurant, next to a running water spring and again enjoyed the traditional Karpathian food. When they finished their dinner, the sun began to set and golden the horizon. On their return, with the darkness approaching, they passed from the coastal villages of Foiniki and Arkasa, went up to the Menetes and returned to their hotel full of new impressions.

Allen and Joelle on the Acropolis of Lidos, in the background “Apostle Paul’s cove”.

In Rhodes
After a few days in Karpathos they departed for Rhodes, where they stayed at a hotel in Psaropoula and toured around Mandraki and the Old Town, that charmed them. They went to Lidos and some on foot and others on donkeys went up to the Acropolis. They visited the archeological sites and finds and from up there they saw the traditional village of Lindos and the cove of Apostle Paul. 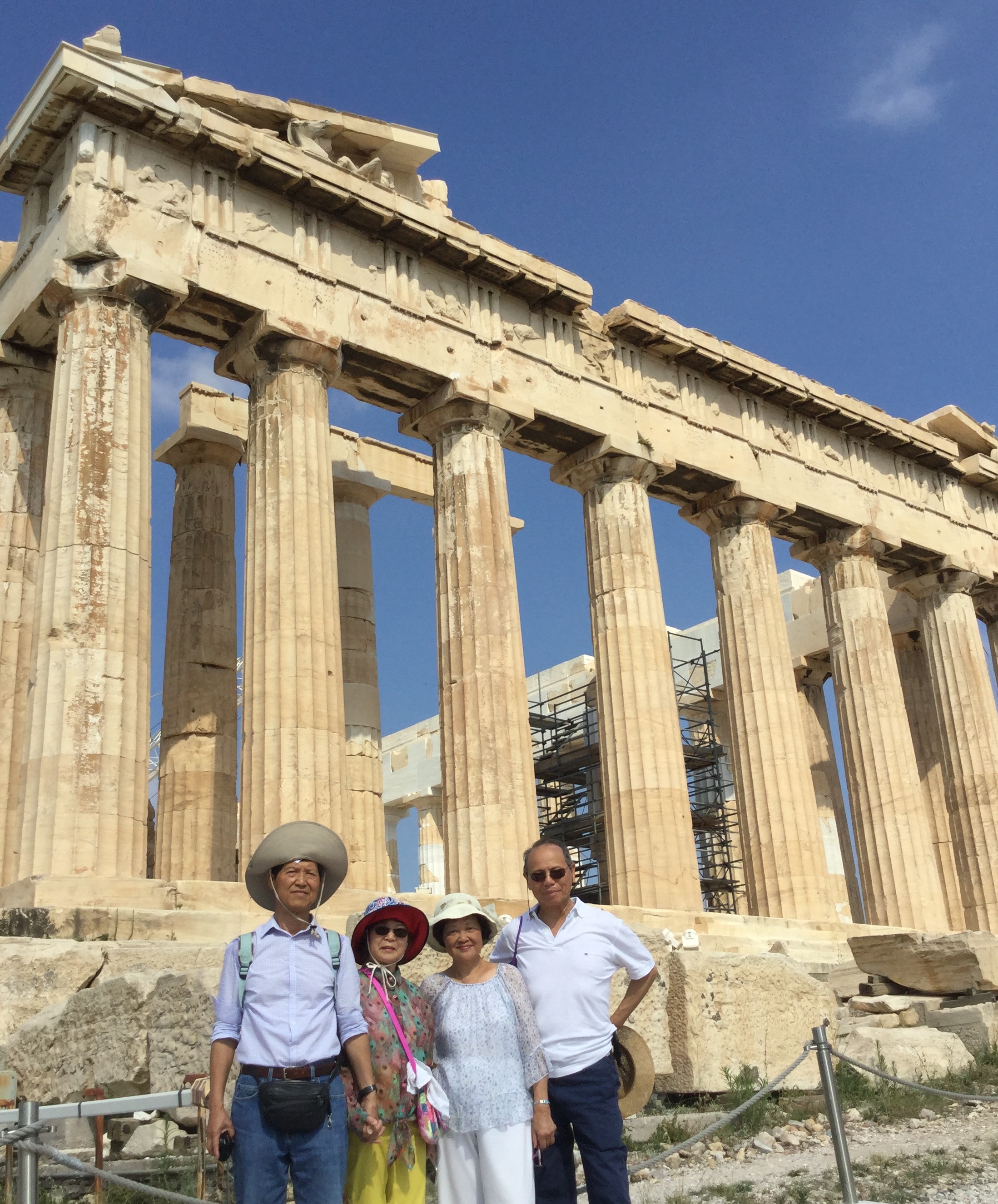 Frank, Tina, Joelle and Allen (from left), in front of Parthenon, immortalize their visit to Athens Acropolis.

In Athens
Before returning to America, they stopped for a few days in Athens and visited Acropolis, the Ancient Agora, and the surrounding area and the theaters of Dionysus and Herod Atticus. They visited the Acropolis Museum and the National Archaeological Museum as well as the Columns of Olympian Zeus and the Panathenaic Stadium. This experience allowed them to get a taste of Ancient Greek civilization, which the Chinese admire and regard it as equivalent to their own.