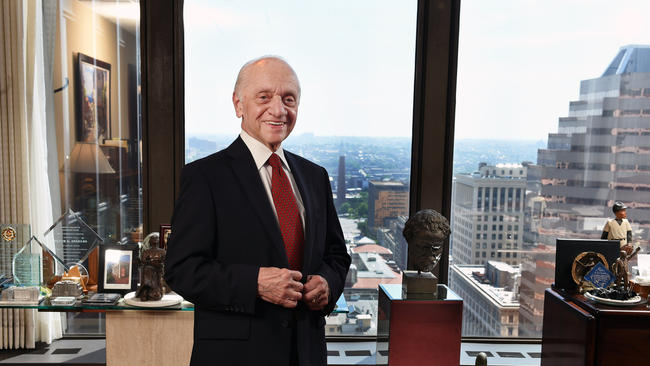 The summer of 2010 had turned sweltering, but Baltimore’s municipal pools were on the verge of shutting down because of budget shortfalls. The City Council was about to hold hearings on the debacle when gifts started pouring in to keep the pools open. The biggest of them, $300,000, came from an anonymous donor, who later turned out to be Peter Angelos.

Many Baltimoreans know Mr. Angelos chiefly as the owner of the Orioles, but there is much more to him than that. Friends and even critics who know him well credit him with an unwavering sense of right and wrong and a bottomless devotion to seeing that the former is done.

He was the only owner in Major League Baseball to stand against using replacement players during the 1994 strike. He made his fortune taking on the asbestos industry for the injuries it caused to thousands who lived and worked in neighborhoods like the one where he grew up, and later he did the same with the tobacco industry. “He didn’t flinch,” said Alan Rifkin, the longtime general counsel for the Orioles. “When you look back on those cases now, it seems as if it was inevitable, but it was never inevitable. … He has a unique ability to see wrongs that need champions, causes that need a powerful advocate, and he has been that for so many people.”

He has a unique ability to see wrongs that need champions.

Mr. Angelos has a fierce devotion to Baltimore. He has poured millions into charitable institutions like the Baltimore Symphony Orchestra and the Greek Orthodox Cathedral of the Annunciation and other churches, and into small acts of kindness for those in need, usually without fanfare. Former University of Baltimore President Robert Bogomolny has said he had to convince Mr. Angelos to disclose the $10 million he gave for the new law school building that bears his parents’ name on the grounds that it would attract more donors.

Many have likely forgotten what seemed at stake when the Orioles were up for sale in the early 1990s. The most likely bidders were out-of-towners, and after theColts’ defection to Indianapolis, it seemed altogether possible that Baltimore would lose its baseball team, too. Mr. Angelos was determined not to let that happen. He co-opted his chief rival and literally sweated through 16 rounds of bidding in a New York courtroom to bring the team under local ownership. Years later, his shrewd moves in the creation of MASN secured the financial viability of Baltimore baseball for years to come. Mr. Angelos tried to land an NFL franchise before the Ravens arrived, and he once offered to help bankroll an effort to keepthe Preakness in Baltimore when its future seemed at risk.

“He’s always been pure Baltimore,” said Mark L. Wasserman, who served as a top aide to William Donald Schaefer in City Hall and the State House. “Baltimore is always in his heart.”