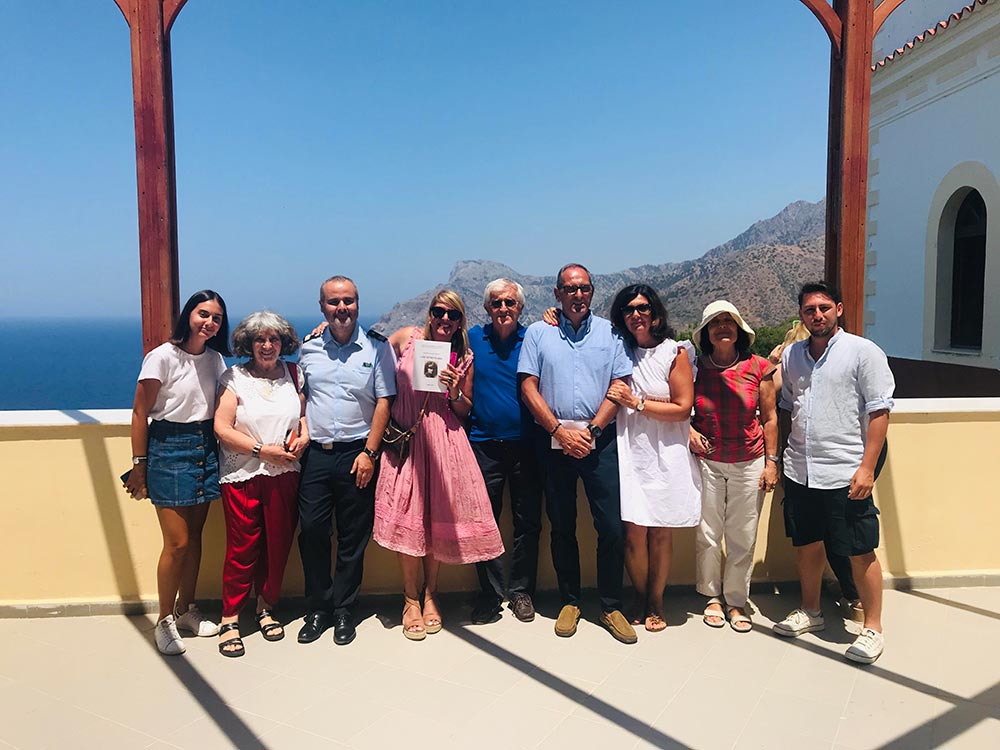 Seventy years ago, during the brutality and destruction of World War II, a wildflower sprouted in Karpathos when the Italian officer Michele Memola, unable to withstand the barbarities of Nazism, escaped and fled to Mesohori where a new humanism sprang up through his friendship with the inhabitants of that village. 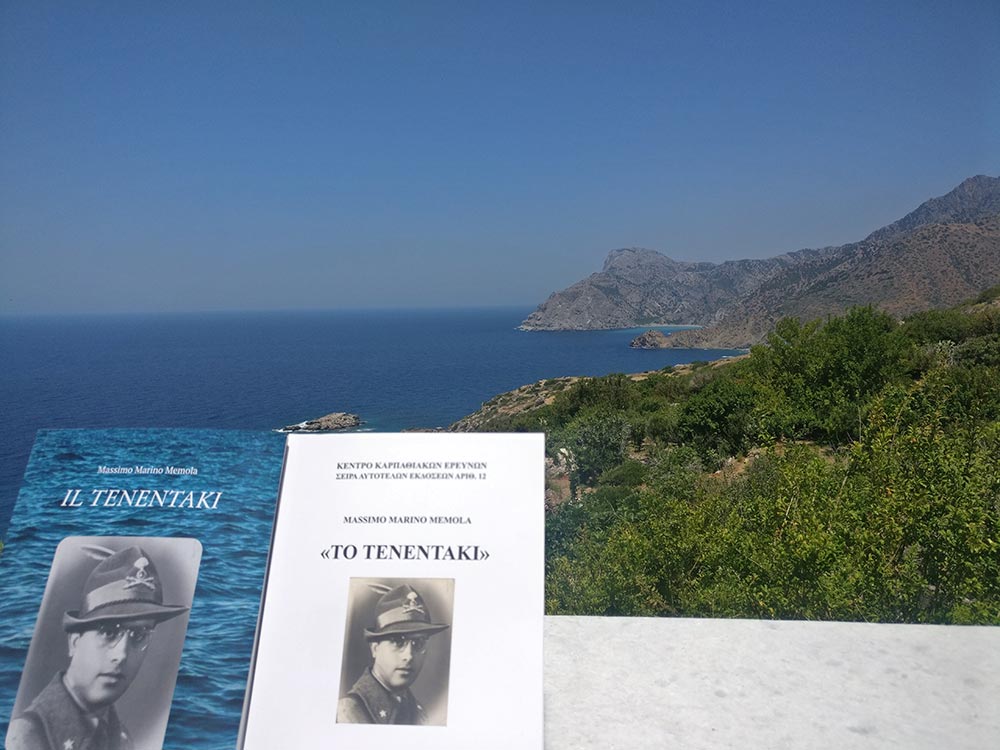 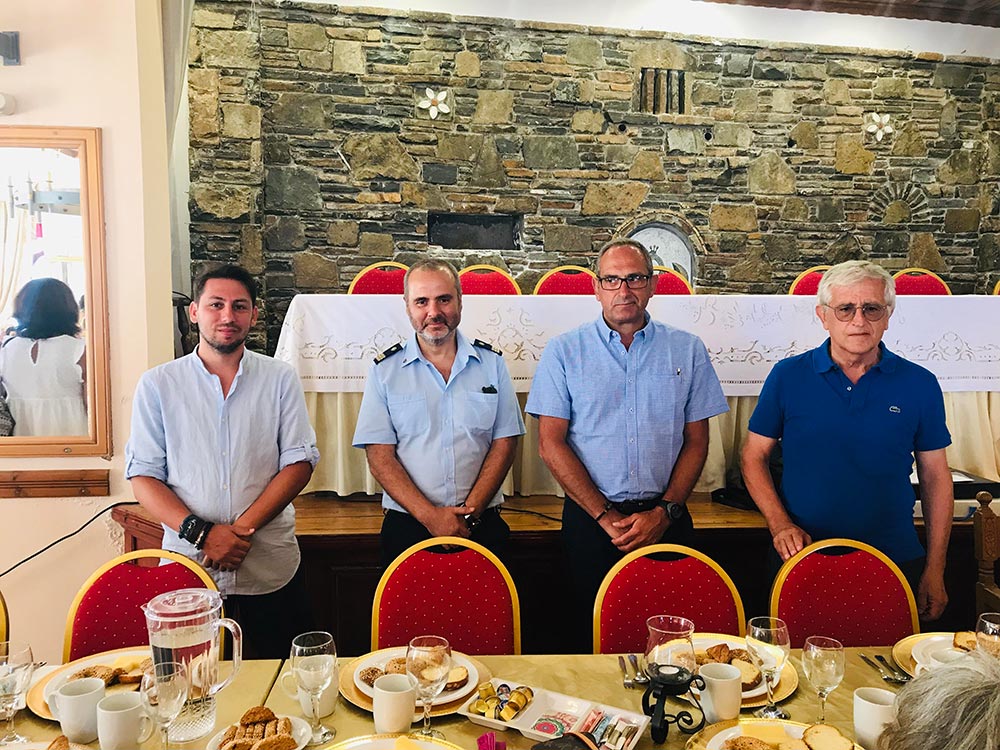 They hid him and protected him

For five months they hid and protected him from the Germans and shared with him the little food they had for themselves. Later, when he was forced to surrender, the Germans imprisoned him, first in Karpathos and later in Rhodes and Haidari, and eventually sent him to German detention camps. He remained there until 1945, and after many tortures he was freed by the Americans and returned home.

He did not forget the Mesohoritans

Years passed, but Memola did not forget the Mesohoritans, who in the difficult years of the war risked their lives to save him and help him survive. Twice, in 1968 and 1971, he visited Karpathos. His rescuers were still living, and he went to thank them, while being hosted in the same houses that hid him. Each time he was alone, his thoughts ran through the past; the dramatic events of the war he lived in were brought back to life and he wanted to memorialize them in a book. But before he could fulfill his last wish, he left for the eternal journey.

Last summer Massimo Memola, the son of Michele Memola, accompanied by the nephew of Michele Memola, Gioacchino Memola, a senior Italian Army officer, arrived in Karpathos. He wished to know and thank the offspring of the people who helped his father and to cross-check and supplement his father’s information before publishing it in a book. 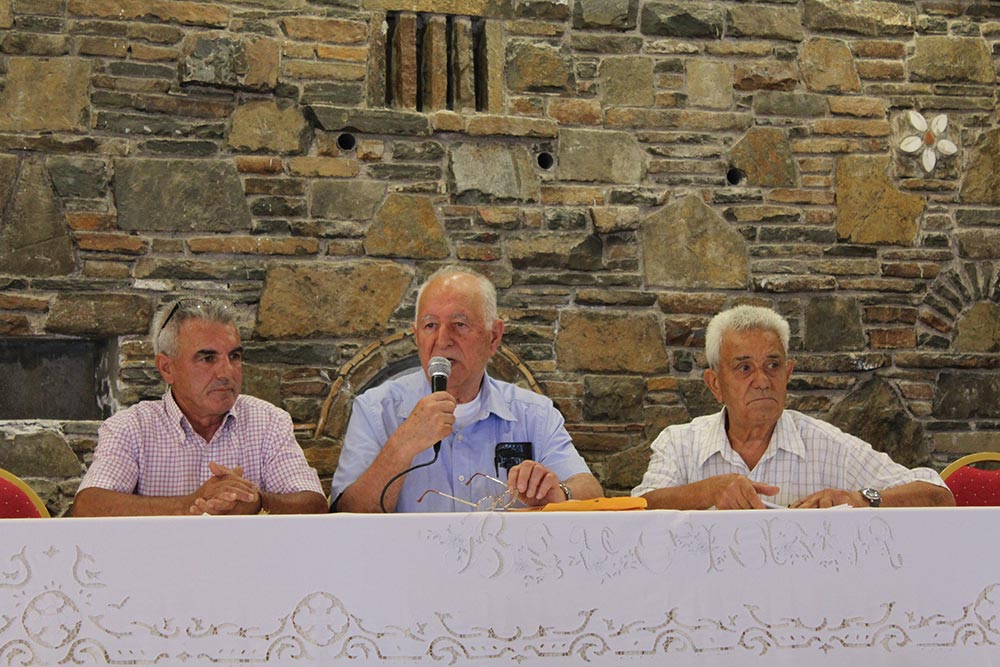 The rapporteur and coordinator of the program Emanuel Cassotis with Basilis Notaras (left) and Theoharis Harokopos. 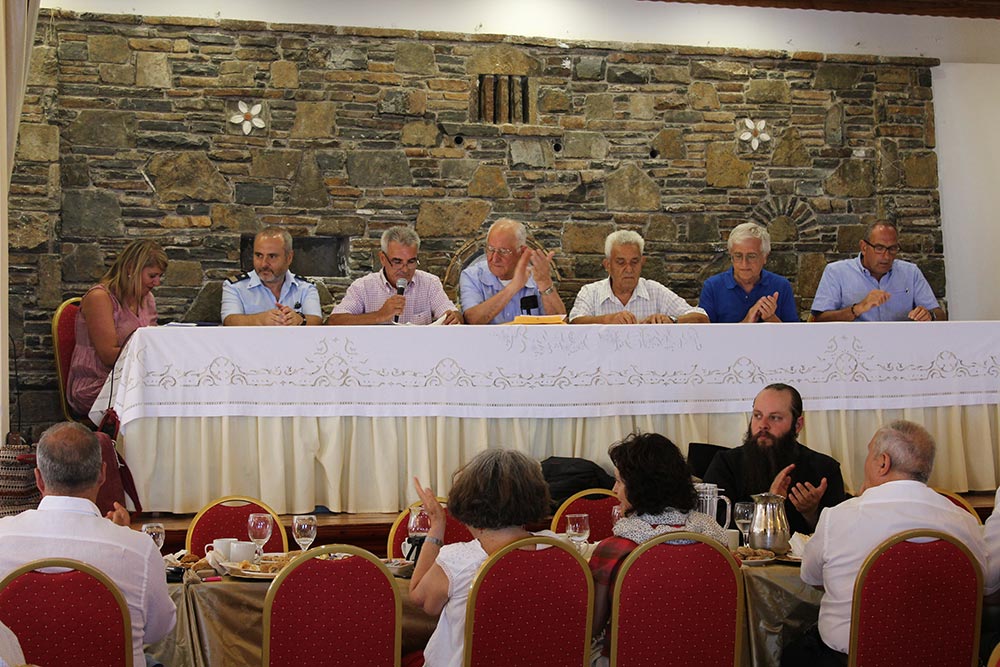 Tears flow from their eyes

He went to Mesohori where he met several offspring of people who helped his father during the war. As he fell into their arms, tears rolled down their eyes. Their thoughts went through scenes and events that they had not lived through themselves but had been imprinted in their memory many times by their parents, grandparents and grandmothers. Seventy-five years have passed since humanism seemed stronger than the cruelty of war. The story of “Tenentaki,” the small-structured Italian lieutenant, lives on in the memory of the Mesohoritans and forms part of the village’s folk tradition.

The houses were closed, the stable in ruins

He walked through the stone alleys of the village at night and with great care, just as his father had walked during the war. He stopped at the houses where the Mesohoritans hid his father with great caution to find them closed and the stables that had become his father’s hideout in ruins. Their owners too had left for the eternal journey. But he had the feeling that they had opened their doors to welcome Tenentaki’s son and tell him their own story.

After a week Massimo and Gioacchino left for their homeland, satisfied with the information they received about Tenentaki, promising that they would return with the book that will save a part of Karpathos’ recent history and highlights the humanity that prevailed on the island during the difficult years of the war. 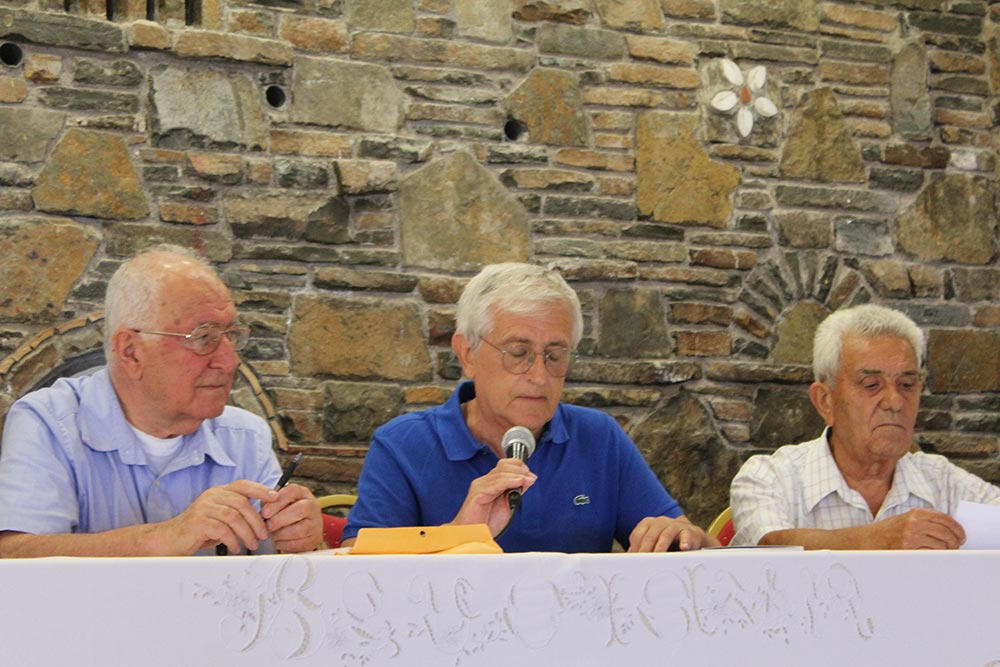 Massimo Memola, with Emanuel Cassotis (left) and Theocharis Harokopos, cites the reasons that prompted him to write the book. 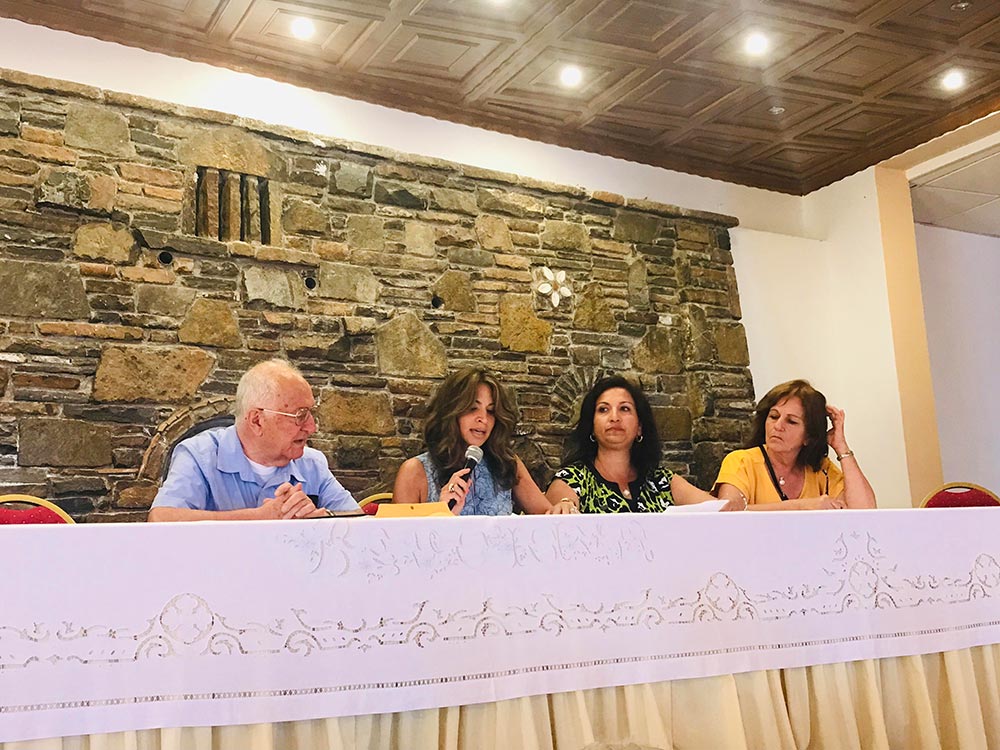 At the turn of the year, Massimo and Gioacchino returned, bringing with them Massimo‘s grandson Michele Giovani Memola and Gioacchino‘s wife Rosanna Volve Memola and their daughter Camila Memola. With them came from Athens the representative of the Italian Embassy Sophia Kataga, the representative of the military attaché Lorenzo Amodio, the Italian-educated painter Magdalene Asteri and the sculptor Katerina Samara. They also brought the promised book, ‘IL TENENTAKI’ by Massimo Memola, which the Karpathian Research Center, in collaboration with the Karpathian Club had translated and published into Greek.

Also, George Manolakis, the president of the Karpathian Club, took the initiative and with the assistance and cooperation of the President of the Local Council Vassilios Notaras and the Church Ecclesiastical Committee planned an event to take place in Mesohori. And after much effort and coordination by these organizations and several people from America, Italy, Athens, Rhodes and Karpathos, which lasted for a whole year, Mesohori wore its festivities to welcome ‘Tenentaki.’ When Massimo Memola and his companions arrived in Mesochori, they found Panagia Vrisiani church flocked by Mesohoritans and other Karpathians.

The Divine Liturgy was performed by Archimandrite Ambrosios with the chanters Theocharis Harokopos, George Touma and John Minatsis, followed by a memorial service for the resting of Michele‘s soul and those who protected and helped him. What joy their souls feel, when after 75 years there are people who remember and prey for them.

Archimandrite Ambrosius performed the Divine Liturgy and the memorial service.

“Kollyva” in memory of Michele Memola and the people who helped him survive.

This was followed by a reception at the congregational church hall, prepared and decorated by the Church’s Ecclesiastical Committee (Rego Matsou, Sofia Kouroublaki, Maria Sakelli, Maria Reissi, Stamatina Vasiliadi, Maria Lykou, Vasilia Vasiliadi). You would have thought that you were attending the festivities of the Holy Mother. The attendees were offered coffee, soft drinks and a variety of traditional dishes followed by a cultural program. The event was attended by the President of the Local Council Vassilios Notaras, the President of the Karpathian Club George Manolakis, the President of the Rhodes Pan-Karpathian Association Fani Sisami and the publisher of the newspaper “Karpathiaki” Kallirroi Georgiou-Manolakis.

With the rapporteur and coordinator Emanuel Cassotis, the President of the Local Council Vasilios Notaras began his greeting, welcoming and thanking those present in the hospitable Mesohori. Then the keynote speaker professor Theocharis Harokopos referred to the historical circumstance of the events that followed ‘Tenentaki’s’ arrival in Mesochori asking for help. 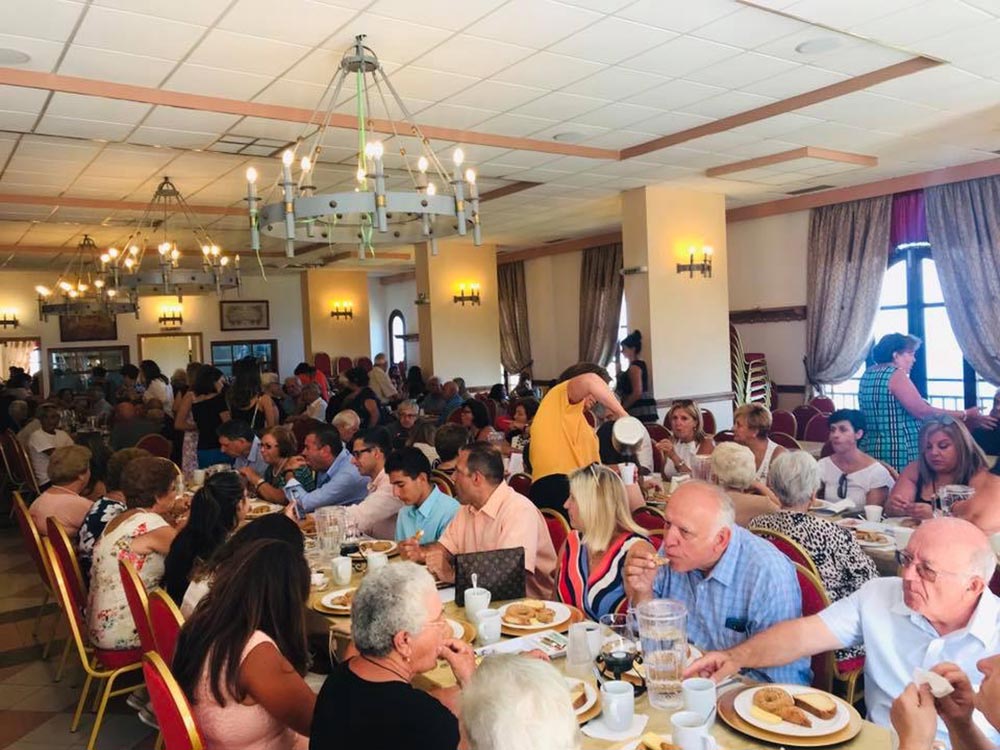 To the Attendees were offered coffee and soft drinks and a variety of traditional dishes.

What prompted him to write the book

Massimo Memola, son of Michele Memola and author of ‘IL TENENTAKI’ followed. He talked about his father’s war experiences that he listened to as a child and that he later composed into a book. He wanted to preserve a family heirloom, but also to thank those who, with their humanity, saved his father and helped him to survive. Memola spoke in Italian that Sofia Katagha translated into Greek.

Then Gioacchino Memola referred to the history of the Italian occupation of the Dodecanese and the turn of events when, on September 8, 1943, Italy moved from the Axis powers to the Allies side. Memola spoke in English, but his speech had been translated, printed and distributed in Greek.

Afterwards Lorenzo Amodio, the representative of the military attaché, thanked and congratulated those who organized the event and emphasized the cooperation and close relations existing between the Italian and Greek armed forces.

The humanitarian part of the program

The event continued with the humanitarian part of the program as Popi Zanaki and Anna Micros read excerpts of letters sent by Michele Memola to the Karpathians to thank them with love and gratitude for their charity and altruism during the war years. And in the traditional way the Karpathians know how to express themselves, the event ended with impromptu traditional poems (mantinades) on behalf of the Ecclesiastical Committee and recited by Sofia Kouroublakis. who expressed the feelings of the Mesohoritans, such as: “Today’s a day of remembrance for our village, we commemorate a child of ours.”